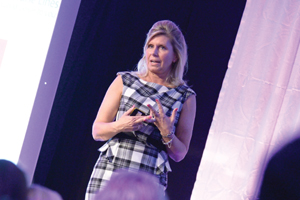 Members of Freedom Travel Group and Co-operative Personal Travel Advisors have faced a challenging year, according to Alison Holmes (pictured), who has headed the consortium and the CoPTA group of homeworkers since May.

Thomas Cook’s announcement of shop closures and job cuts in March brought fresh uncertainty as the management teams of Freedom and CoPTA were merged.

Holmes told the Freedom and CoPTA conference in Glasgow at the weekend: “We were all put on consultation in March and brought into one [management] team. We did lose a couple of people. But we are a larger team now and that is a positive move.”

She reassured members: “Thomas Cook’s position is a lot stronger now. The turnaround [at Cook] has been incredible.”

Holmes reported Freedom membership numbers were back close to the level of two years ago, when the consortium had 150 members.

She said: “We are still attracting strong businesses to the group. We’ve stepped up our recruitment. We have 20 new Freedom members this year and we’re talking to 10 potential members.”

Holmes reported Freedom group revenue up 3% year on year for the 12 months to September. Average margin across the consortium was slightly down on last year but still above 10%. Sales of Cook product were up 20%. Holmes said: “Business shifted to standard packages more than dynamic packages.”

She was similarly upbeat about the CoPTA business despite a fall in membership. Holmes said: “We’re not losing any members now and we’ve brought 20 homeworkers on board in the last two months.” She reported the average margin for CoPTA members was above 9%.

Holmes told Travel Weekly the financial problems at Thomas Cook in 2011 had made some Freedom members “nervous”.

But she argued Cook’s latest round of shop closures had benefited some members, saying: “We had some ex-Thomas Cook managers take on the businesses and join us.”

Six had joined from Cook, she said, another two were poised to, and Freedom member Anglia Co-operative Society had taken six shops. Holmes added: “Cook’s price parity [online and in shops] really helped independent agents to be competitive.”

She said: “People are loyal to Freedom and to CoPTA and it speaks volumes because people will vote with their feet.”

Hemingway: We need to rationalise our supplier base

Thomas Cook Co-operative Travel commercial director Paul Hemingway addressed the conference by video as he was unable to attend for family reasons.

Hemingway said: “Since March we’ve faced significant challenges. The 2013 market was mixed. Some of you were able to take opportunities, others suffered in the lates period.” However, he insisted: “The future is very positive. Thomas Cook has seen a strong recovery and relaunched its brand.

“We’ve talked about the need to rationalise our supplier base. But we need a balance so you have as wide a choice to sell as possible. I think we’ve reached that now.”

Freedom and CoPTA members are poised to benefit from a series of technology developments.

The groups’ Intuiti search technology will be relaunched as V-Suite this month, with group head Alison Holmes pledging: “The majority of homeworkers will be ready to use V-Suite in January. As soon as all the homeworkers have it then it will be rolled out to Freedom members.”

Thomas Cook Co-operative Travel commercial director Paul Hemingway said: “You will see a completely new Tarsc functionality. We believe Tarsc will be the best system on the market for homeworkers and consortia.”

Accommodation supplier Bedbank offered a free website to all Freedom members on the condition they make 10 or more Bedbank bookings a month.