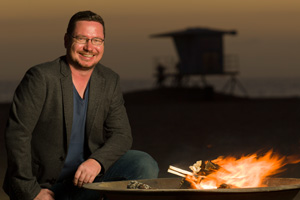 It was on the trip that Simon, senior travel consultant at The Travel Shop in Sutton Coldfield, bought an engagement ring for his girlfriend Jo.

“She said yes!” he beams after presenting the square silver ring adorned with diamonds to his girlfriend during a romantic pub lunch within weeks of returning from Travel Weekly’s annual Cover Stars trip.

“I attached it with a ribbon to a heart-shaped silver bauble and gave it to her as an early Christmas present. I didn’t get down on one knee – just as well, she said she would have said no if I had!” he jokes.

He adds: “I was more nervous asking her parents’ permission the week before, but they were really pleased.”

Although Simon hadn’t planned to buy a ring while in the US, when he was given a surprise gift card worth $200 to spend at the Outlets at Orange in Los Angeles, one of two Simon Shopping Destinations visited during the trip, he simply couldn’t resist.

“I was looking around and nothing was jumping out at me except for the rings. In the end I fell in love with this ring and it even fitted.

“We had talked about getting married, but this was just the perfect opportunity and I knew she’d love it,” recalls Simon, who hopes to wed Jo, a student nurse, in the summer of 2015.

“This made the trip even more special,” admits Simon, 36, who works in the family business and is also director of a newly-acquired business Florida Holidays.

Simon started in the family agency five years ago after working in various sales jobs and spending time in the US.

He was clearly destined to work in travel – his parents met at Horizon Travel before setting up the agency when the operator was sold to Thomson in 1989. From an early age Simon worked at the family’s shop putting labels on brochures.

“I wish I’d done it sooner, but I thought people would say it was a cop out working for my mum and dad! It’s a great industry.”

He adds: “Being a travel agent and having opportunities to go on these trips is a privilege – and I made some good friends on this one.”