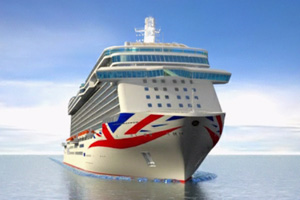 P&O Cruises has revealed it is changing the livery of its ships, adding a Union Flag design intended to highlight the line’s British heritage.

As part of the modernisation of their fleet the new design will feature on the bow of all ships.

The cruise line said that at 94 metres long the flag will be the longest in the world.

The line’s ships will also gain blue funnels, with a rising sun motif meant to symbolise the brand’s oriental heritage.

The new look will first be introduced on Aurora which goes to dry dock later this year. New ship Britannia will sport the livery when it launches in February 2015, with all other P&O ships featuring the new design by the end of 2016.

David Dingle, chief executive, said: “In our 177th year we are unveiling a new, contemporarily styled livery which symbolises all that we stand for, pointing to the future and celebrating our British heritage.

“This bold new look will make our ships yet more distinctive and recognisable across the world.

“Our ships will proudly carry on their bow Britain’s most distinctive symbol, the Union Flag, to all corners of the globe.

“The P&O Cruises name will be emblazoned along their hulls and the rising sun, the enduring symbol of our heritage, will shine from their funnels.

“This modern new look will exemplify the strengths and virtues of our company long into the future.”