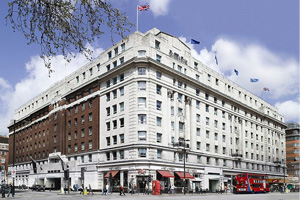 Three female tourists on a shopping trip to London were attacked by a man with a hammer in their room at the Cumberland Hotel in the middle of the night.

One of the women, who was visiting the UK from the United Arab Emirates, was left in a critical condition, while the other two suffered head and facial injuries, during the attack at the hotel near Marble Arch in the early hours of Sunday morning.

Police said believe a single male suspect went into the bedroom on the seventh floor of the hotel, where the three women and three children were asleep in adjoining rooms.

It is thought the women had deliberately left their rooms unlocked as they were travelling as part of a large family group, the Telegraph reported.

Police believe the man may have attacked one of the women after she woke and disturbed him as he was attempting to rob her.

He then turned on the other two women in the group when they ran to see what was happening and then fled the hotel in bloodstained clothes.

Police, who recovered a hammer from the scene, are treating the attack as attempted murder and have appealed for witnesses to help them catch the man.

The family, who had come to London for shopping and sightseeing, arrived in the UK between April 3-5 and the women had visited large West End stores on Saturday.

Detective Superintendent Caarl Mehta reportedly said: “Early indications are that theft appears to be the motive. We are yet to establish precisely what happened, but we are in close liaison with the family to establish what is missing from the room.”

He added: “We are working very closely with the hotel staff and carrying out a detailed forensic examination both of the room as well as the surrounding area, an examination of CCTV both within as well as outside the hotel, and also identifying witnesses.”

Robin Hibbert, head of operations at New West End Company, which represents the retail and leisure businesses in London’s West End said: “This is very much an isolated and extraordinary incident for London, one of the safest cities in the world.

“We have spoken with the hotel who are focused on providing support to the families involved as well as guests, many of whom are regular customers. We have been in discussion with the police and we support their urgent call for witnesses.