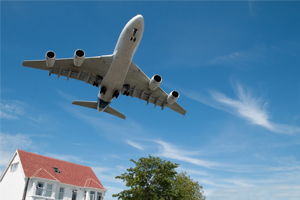 A ‘noise tax’ could be levied on airlines to encourage them to deploy the quietest possible aircraft and compensate those living under flight paths, under Civil Aviation Authority proposals.

The regulator said the tax would penalise flights based on how much noise pollution they cause, while proceeds could be used to pay for insulation for communities near airports.

Although the move is considered a “last resort” if other schemes do not succeed in encouraging the aviation industry to tackle aircraft noise, the CAA said it could be based on a system successfully imposed at French airports, the Telegraph reported.

The Tax on Air Transport Noise, introduced in France in 2005, varies depending on the number of people affected by noise from the airport, the weight of the aircraft at take-off, the plane’s noise rating and the time of day.

In order to influence airlines the tax could be set in the region of £34 for a Boeing 737-400 aircraft arriving at Heathrow, the CAA suggested, meaning it would be unlikely to significantly affect ticket prices, but it could risk affecting the viability of some routes.

In its Managing Aviation Noise report, published on Thursday, the CAA proposed a host of measures aimed at reducing noise from aircraft taking off and landing at airports in the UK and compensating those living nearby.

Airlines should aim to reduce noise pollution by purchasing the quietest planes and making minor adjustments to wing flaps and landing trajectories, the report said.

Gatwick and Heathrow were warned that spending “significantly above” current levels on noise mitigation is likely to be a “prerequisite” for the expansion of any airport.

It recommended that airports structure landing charges to reward airlines for operating cleaner, quieter flights, adding that residents could be compensated for noise pollution with tax breaks.

The report continued: “A per passenger noise tax would not have to be high to have a significant impact on route profitability and potential viability. Such measures should therefore represent a last resort.

“If other measures do not go far enough to engage the aviation industry in the effort to manage noise, policymakers could consider a further incentive applied with the introduction of a noise tax.”

CAA group regulatory policy director Iain Osborne said: “Very many people in the UK are already affected by aviation noise and it’s clear that unless the industry tackles this issue more effectively, it won’t be able to grow.

“The recommendations we’re making will help the industry to reduce and mitigate its noise impact, whilst also making sure the communities affected by aircraft noise are fairly compensated and feel much more involved in the way their airport operates.”