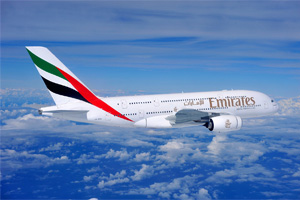 Emirates has announced it will look again at buying a fleet of Airbus A350s after recently cancelling a $16 billion order for 70 of the new aircraft.

The Gulf carrier cancelled its order for the aircraft earlier this month in a move seen as a serious blow to Airbus.

Emirates is among the world’s biggest airlines and its announcement will trigger a major battle between Airbus and Boeing as the airline said it would look at both the A350 and Boeing 787.

The carrier was to have been the launch customer of the A350, which is due to launch later this year, following a deal announced in 2007.

Emirates gave no reason for the cancellation, but it’s understood concerns about the aircraft’s performance lay behind it.

However, Emirates chief executive Tim Clark said yesterday: “We will re-engage with Airbus on this aeroplane at the end of this year, the beginning of next year.”

Clark said Emirates would “also engage” with Boeing about the 787 as an alternative.

The A350 is a wide-body, long-haul jet with a carbon composite fuselage and other fuel-saving features similar to the 787.