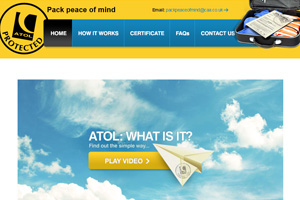 The CAA campaign will again promote the slogan ‘Pack Peace of Mind’ and will feature TV, radio and national newspaper advertising as well as online and social media marketing.

Details have yet to be finalised, but it will be the first time the campaign has featured on TV, with adverts due to appear on satellite and digital TV channels.

The adverts will urge families to look beyond the price of a holiday and make sure their bookings are Atol-protected.

The campaign is due to run from New Year’s Day throughout the peak booking period and into March.

The CAA launched its initial Pack Peace of Mind campaign at the start of the summer 2013 peak booking season in January last year.

However, that campaign saw material run chiefly online, although it expanded to national newspapers including the Daily Mail, Sun, Daily Mirror, Daily Express and Daily Record in Scotland after the government sanctioned a doubling in spending.

Subsequent market research suggested a small rise in the level of Atol recognition consumers to 82%.

A CAA survey in December 2013 found 5% of consumers had suffered the loss of a holiday due to a travel company failure.

Full details of the latest ‘Pack Peace of Mind’ campaign are expected in the next fortnight.