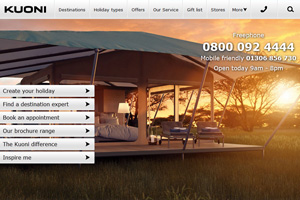 The trade has reacted positively to Kuoni UK being unexpectedly put up for sale but raised doubts over its future in the trade.

The Swiss-owned parent is to sell its tour operating businesses, including the UK arm, to focus on business-to-business services.

Miles Morgan Travel owner Miles Morgan said: “For Kuoni, it’s good news. For agents, it depends on who the purchaser is and whether it’s agent-friendly.”

Neal Basnett, chief executive of Elite, admitted the consortium’s Kuoni sales were 25% down last year because of its shop strategy. “The best outcome for us would be if Kuoni got rid of its shops.”

But Kuoni UK managing director Derek Jones said trade support since the news broke had been exceptional. “We are still seeing record-breaking sales through the trade.”

He pledged his team would “work tirelessly” to ensure the staff and the philosophy are maintained under new owners.

Already, dnata and Tui Travel have been mooted as potential buyers, but a senior industry source suggested “it won’t be the same company” after a takeover, adding: “Why on earth struggle on with traditional tour operating?”