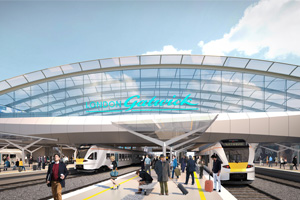 Details of Gatwick’s new railway station have emerged as an additional £10 million of funding was announced to secure the redevelopment of the transport hub.

The £120.5 million redesign will transform the station, with work scheduled to start in 2017 for completion in 2020.

The £10 million announced by Department for Communities and Local Government minister Penny Mordaunt is funding that the Coast to Capital Local Enterprise Partnership (LEP) will put toward the station’s redevelopment.

The improvements will see the station “comfortably manage” the expected growth in air passengers using the single runway airport, with demand at the station set to increase by 5 million to 20 million rail passengers a year by 2025.

The airport’s chief commercial officer, Guy Stephenson, said: “Gatwick has transformed itself in recent years and millions more passengers are benefiting from the world class service the airport now offers.

“The redeveloped station will complement Gatwick’s transformation and our passengers will experience a seamless transition between the airport and the new station.

“The whole project is a fantastic example of the public and private sector working together to deliver a world class transport hub.”

The station upgrade will be delivered alongside an increase in capacity on rail services through Gatwick, between Brighton and London.