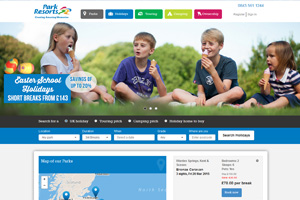 Bookings for 2015 holidays at domestic holiday operator Park Resorts were up by a record 21% last month against January 2014.

School holiday bookings rose by 29%, according to the company which is spending more than £20 million on its 48 UK holiday parks.

The operator is improving its digital presence, with a new website prompting a surge in online bookings.

On a single day’s trading on January 31, revenue was up 47% year-on-year, with the firm predicting that mobile and tablet bookings will overtake desktop bookings this year.

Mobile grew 143% and tablet 7% as a percentage of overall online transactions in January. The company’s social media channels have also seen growth with Facebook likes up by 91% and YouTube views increasing by 114%.

Park Resorts also reported a trend for customers booking early for school holiday dates while off-peak breaks are growing in popularity with pre-school families and couples.