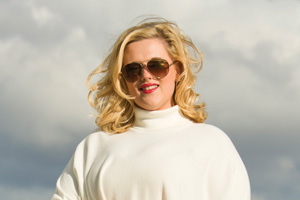 Deciding to go on the Cover Stars trip to Massachusetts was one of the hardest decisions of Kirsty Sloan’s life – but one of the best she’s ever made.

Five days before she left, her grandad died suddenly. He was 75. “It was such a difficult decision on whether to go. He had only been poorly for a couple of weeks,” recalls Kirsty,who agonised over whether to still go on the Cover Stars trip.

But knowing her grandad’s love of travel helped her make the crucial decision to join the trip as planned.

“He would have wanted me to go,” says Kirsty. “My grandad knew I had a place on the trip and he was really proud of me. The funeral date was held off until I got back. Everyone was so welcoming on the trip and made me feel so comfortable – I made the right decision to go. It was too good an opportunity to miss and I feel really lucky to have gone.”

In fact, Kirsty loved Boston and Cape Cod so much she is already planning a return trip for next year so she can take her five-year-old son Aiden with her.

“It was somewhere I had wanted to go and now I’ve been there I’ve been recommending it to lots of my clients. Boston is such a beautiful place and has so much history, although Cape Cod was my biggest highlight of the trip,” she says.

“I enjoyed going to the beach, even on a cold day it felt like the right place to be. It was one of the most breathtaking places I’ve been to and so much fun. The people there couldn’t do enough for you.”

Among her highlights of the trip were the Nobska Lighthouse and the JFK museum in Cape Cod and the Skywalk Observatory and Duck Tour in Boston.

Flying out upper class with Virgin Atlantic was also something Kirsty will never forget.

“It was like all my Christmases had come at once. It was surreal, I couldn’t believe it was me on the flight,” she says.

“We were treated like royalty. The service and the food was amazing. They took my coat when I got on and they were so friendly. I had steak for my meal and then I drank a mojito at the bar; I didn’t expect to do that, it was such a pleasure!”