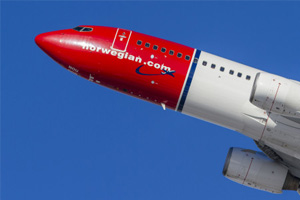 Norwegian more than doubled passenger carryings on its growing long haul network in the second quarter of the year.

Norwegian runs 21 long haul routes and has 28 destinations on sale including a new Gatwick-Boston service. The airline operates more than 400 short haul routes and carried seven million passengers in the quarter, up nine per cent year-on-year.

Pre-tax profits for the second quarter rose to NOK 456 million from a loss of NOK 137 million in the same period in 2014.

Falling fuel prices have outweighed the effects of a weak Norwegian krone.

Demand and advance bookings were described as “satisfactory” entering the third quarter of 2015.

“Norwegian may decide to adjust capacity in order to optimise the route portfolio depending on the development in the overall economy and in the marketplace,” the airline said.

“Norwegian is establishing and preparing for an organisational structure that will secure cost efficient international expansion and necessary traffic rights for the future.”

Chief executive, Bjørn Kjos, said: “It has been a good quarter for Norwegian with a positive growth throughout our route network, particularly on our long haul network.”