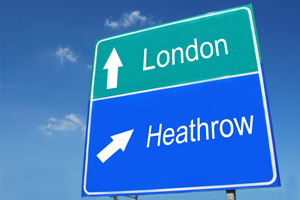 Heathrow passenger numbers rose by almost 5% in July to a record 7.29 million over the same month last year.

More than 250,000 passengers used the airport on three separate days during the month.

Larger, quieter, fuller aircraft continued to drive passenger growth at the capacity-constrained airport. Seats per aircraft increased 2.3% to 209.6 while passengers per aircraft rose 4.1% to 175.6 and load factors increased 1.8% to 83.8%.

Middle East traffic rose by 13.3% as carriers added new A380s on routes to the region.

The government has pledged to make a decision on airport expansion in the southeast by the end of the year after the Airports Commission recommended a third runway at Heathrow.

The airport warned that increasing demand for services to fast-growing markets like Mexico and China cannot continue without additional capacity.

Heathrow chief executive, John Holland-Kaye, said: “I agree with the prime minister’s comments during the recent trade mission to Southeast Asia that Britain should be trading more with the rest of the world.

“As the UK’s largest port, Heathrow is the beating heart of Britain’s trading network. Our best exports, whether Scottish salmon or life-saving pharmaceuticals, all pass through Heathrow on their way to markets across the globe.

“With expansion, we can add connections to new markets, opening up the lucrative trade routes that will secure British prosperity over the coming decades.”