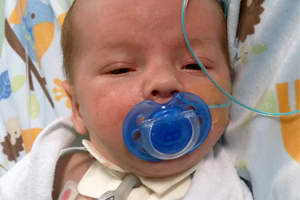 Abta LifeLine is calling on the trade to back Charlie’s Appeal, a campaign to raise £15,000 for the sick baby of a former industry employee. By Juliet Dennis

When Charlie Reynolds was born five months ago, his parents Sophie and Scott had  no idea what lay ahead.

Little could they have imagined that three weeks later, their bundle of joy would be diagnosed with bilateral vocal chord palsy, a rare condition that results in the paralysis of the vocal chords.

Doctors are still amazed that Charlie – whose mum Sophie was Bourne Leisure’s sales executive for the south until last year – survived his first weeks of life without help to breathe.

“Every time he breathed, he squeaked, and if it stopped, we thought he had stopped breathing,” says Sophie, who also has a two-year-old daughter, Isabella. “It was only after Charlie was rushed to a London hospital and put into intensive care that it hit me just how serious it was. It was horrendous; I just cried and cried.”

It was not until surgeons put Charlie under general anaesthetic and put a camera inside him that his condition was diagnosed. After undergoing a tracheostomy to insert a tube into his neck to help him breathe, Charlie came home.

But the family’s challenges were far from over. Carers told them their first-floor, two-bedroom flat in Chipstead, Surrey, was unsuitable for Charlie, who needs a separate room.

He currently sleeps in the family’s lounge and a nurse watches him five nights a week while he is connected to noisy breathing apparatus. On the other nights, Sophie and Scott take it in turns to stay by his bedside.Charlie has to be watched 24 hours a day and his breathing tube must be unblocked regularly.

“If he coughs and phlegm gets into his tube, it will block and he could die within seconds,” says Sophie. “We suction him about 40 times a day.”

As they have a mortgage, Charlie’s parents cannot get help from their local authority. So when Stef Trevett, senior travel consultant at Bailey’s Travel in Leighton Buzzard, suggested contacting Abta LifeLine, it gave them much‑needed hope.

The charity has launched Charlie’s Appeal to raise £15,000 – the amount needed to rent a three-bedroom house for two years while the family awaits an operation that could correct Charlie’s condition.

Sophie adds: “This is amazing and comes in our hour of need.

“Having a house will make our life so much easier. We won’t panic every time we have to lug machines up the stairs to the flat and Charlie will have his own room with his toys in.”

Abta LifeLine director Trudie Drake says: “On the day we launched the ‘Let’s make a Noise for Charlie’ appeal, we raised £1,200 in just a few hours.

“But we have a long way to go and need the travel community’s support to reach our target. Together, we can make a difference to this family.”

To donate, go to: https://campaign.justgiving.com/charity/abta/charliesappeal