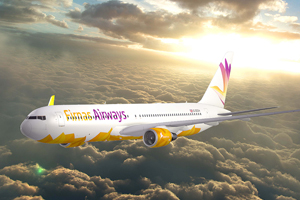 Firnas Airways is seeking funding from the Gulf region and is in talks with London-area airports about creating a base.

The airline will be aimed at the large British Muslim population travelling to the Middle East and Asia. Bespoke services will include halal cuisine and alcohol-free drinks.

The $50 million cash being sought would support operations for the first three years from launch including the cost of leasing three Boeing 767-300ERs, according to the company.

The airline will retrofit the aircraft with “new dynamic seating concepts” that will offer passengers generous legroom, as well as a state-of-the-art in-flight entertainment system and free Wi-Fi.

The airline’s founder and chief executive, British entrepreneur Kazi Shafiqur Rahman, wants to run routes from the UK and that are currently unserved or underserved but offer ‘huge commercial potential’.

He plans talks with prospective Middle East investors when he attends the inaugural World Halal Travel Summit & Exhibition in Abu Dhabi on October 19-21.

Rahman said: “These are routes that remain unexploited. Firnas Airways will fill the void by providing a world-class, premium service at economy prices.

“Safety and security will be a top priority. We are developing innovative concepts with the relevant authorities to push the boundaries in this field.”

He added: “We are now ready to take our business to the next level. With Kevin on board and funding in place, we will be able to work towards a 2016 launch date.”