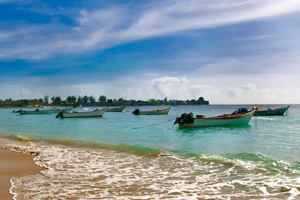 The murder of a British lawyer and his wife at their home in Tobago has triggered an alert for travellers to the Caribbean island.

Local police said both Richard Wheeler, 73, and his Trinidad-born wife Grace, 67, had been stabbed with robbery the possible motive for the killings on Tuesday.

“A British national was murdered in the Riseland area of Tobago,” the Foreign and Commonwealth Office confirmed.

“If possible, use hotel or pre-booked taxis with set fares,” the FCO added in an updated travel advisory without going into further details.

The FCO says incidents of violent crime on the island are rare but two German tourists were murdered last year.

“Most visits to Tobago are trouble free, but tourists, including British nationals, have been robbed. The inability of the authorities to catch and prosecute offenders remains a concern.

“You should maintain at least the same level of security awareness as you would in the UK and make sure your living accommodation is secure.”