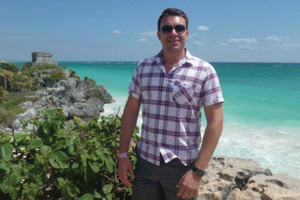 Michael Larkin was one of eight ex-Phileas Fogg Travel staff who joined forces to create call centre agency 2Bookaholiday in 2005. A decade on, six of the eight are still there, and the business employs a further 12 staff and turns over £14 million

Q: You were one of the original eight founders in 2005. How did it happen?
A: We were all happy working at Phileas Fogg. However, it ceased trading on November 5, 2005, and 2Bookaholiday was up and running by December. I was 25 at the time; it was a case of getting together with others in the company and saying “let’s do it for ourselves”. We all used our redundancy money and we’ve never had a loss-making month or had to take out a bank loan. In 10 years, it has become a business with a turnover of £14 million and there’s room to grow.

Q: What type of business was 2Bookaholiday 10 years ago?
A: It was a dynamic packagingcall centre agency and most leads came from Teletext Holidays and that worked for a number of years. There was never a 10-year plan; we had a small corner shop with all our desks crammed inside.

Q: Why did you leave Hays Independence Group to become the first member of the Broadway Travel Consortium?
A: We were approached by Broadway. They knew our business well. Jill Mitchell (formerly Gardner), who had moved to Broadway from Hays, had been brilliant with us at Hays where we started. It was a leap of faith but I thought it was a calculated risk. We have just won the consortium member of the year award which has meant a lot.

Q: How has the business changed?
A: Moving to Broadway has provided us with the chance to branch out into areas that were previously unavailable. Now we have a vision that if you focus on certain areas, you can be more successful. We are good in the Mediterranean, but in the past year we have launched the Going Luxury brand, which includes a small cruise department. We are realistic about what is achievable.

Q: In 2013, one of your main providers of sales leads dried up when 2Bookaholiday was culled from Teletext Holidays’ supplier list as a result of its decision to go from 15 suppliers to one. What impact did that have?
A: More than 80% of our business came from Teletext. Sadly, we made some redundancies and anticipated the worst. But we spoke to a number of suppliers and we no longer have all our eggs in one basket. We formed a strong relationship with Icelolly and it now plays a vital role in our business, supplying 50% of leads, and we work with bed banks and airlines. After Teletext, we started actively emailing our own database of 60,000 people and we were quite surprised by the response. We were sitting on that for a long time without realising it. We learnt lessons from what happened with Teletext.

Q: What does the future hold?
A: This year has been an eye-opener to us; there is potential to grow if you employ the right people and put the right effort into training. We have increased turnover by 15% on last year and I would hope we would get that again next year. Our target is to gofrom £14 million to £17 million in 2016. We are looking to take on more staff in January. We set up GoingLuxury this year and we plan to make the site bookable and improve the search facility. It has accounted for 10% of sales this year and we are targeting 20% next year.

1. Smile down the phone: Be enthusiastic and enjoy chatting to the client.

2. Never give up: If a client says they will call back, why not offer to call them back instead?