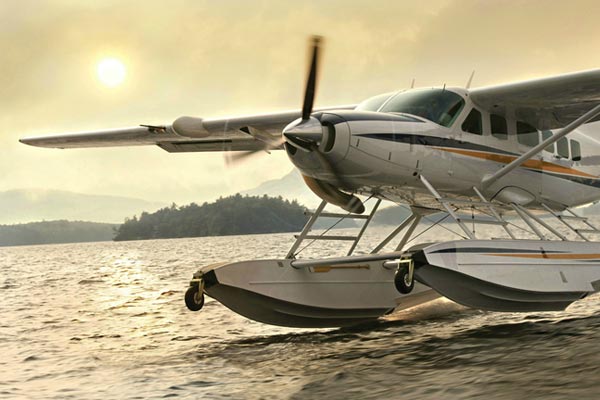 Plans have emerged for a seaplane service between airports around London and an island resort 20 minutes away on the Essex coast.

The plan is being led by David West, managing director and chief pilot of Loch Lomond Seaplanes, which has run flights across the west coast of Scotland for the past decade.

An amphibious aircraft, capable of landing on water and conventional runways, is to be put to work on a route between London and Osea, a private island in the Blackwater estuary that has become an exclusive resort and party and wedding venue.

Two aircraft a day are due to land in the waters surrounding the 400-acre island from the summer.

It is owned by the music producer Nigel Frieda and has attracted celebrities such as the actress Sienna Miller, the musician Johnny Borrell and model Poppy Delevingne.

West, a former Cathay Pacific captain, said tickets would be available to the public at around £89 each.

They will link the resort to small airports in London and the home counties, including Biggin Hill, Farnborough, Denham and High Wycombe.

It coincides with the company’s pending delivery of its second $3 million Cessna 208 Caravan aircraft, capable of carrying ten people at up to 160mph.

West said that the ultimate aim was to obtain permission from the Civil Aviation Authority and Port of London to run direct flights from the Thames to its Loch Lomond headquarters.

It operates sightseeing tours on the west coast of Scotland and will start scheduled services from Loch Lomond to Skye from next month.

West told the Times: “It’s is about taking people back to the romantic days of flying.

“You can turn up 15 minutes before your flight, park your car by the side of the water and get on board. This is the simplicity of it.

“The beauty of seaplanes is the lack of infrastructure that they need to operate. There’s none of the demands you find in a big airport that makes flying so unpleasant for a great many people.

“It is this wonderful experience rather than something you have to endure.”