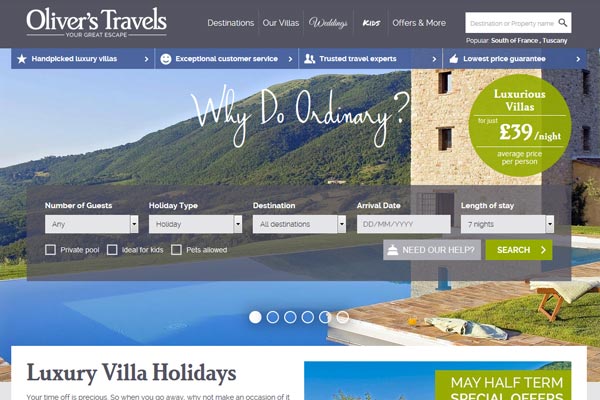 Meon Villas, part of Tui’s Specialist Holidays Group, was closed down at the end of October last year after a decision to focus on the hotel villas featured by sister brand Sovereign Holidays. The brand, which featured villas across the Mediterranean, had returned to selling through travel agents in 2007.

Tui said that the villa operator’s assets, including its client and trade database and the Meon name, had been sold for an undisclosed sum. It is likely to retain around 15 of the 80 property contracts which Meon had.

The transition of data is still happening, but visitors to the Meon website will be redirected to Oliver’s Travel.

The independent specialist has villas and chateaux in Europe and the Caribbean, and the acquisition will allow it to increase its villas in key Mediterranean destinations and use Meon’s existing database.

“Currently about 3% of bookings are done through the trade; the majority are done directly on our website,” he said. “We do a lot with SEO and pay per click but we definitely see opportunities to grow through the trade.

“I believe we can get to 10% of sales through agents quite quickly and I think that can eventually grow to 20%.”

Bell encouraged agents who would like to increase villa sales to get in touch.

Asked whether he believed the likes of Airbnb had had a negative effect on the villa market, Bell said: “Airbnb has definitely raised awareness of the villa sector. I think the companies that have failed were too dinosaur-like in their ways of working. We embrace digital marketing and technology and we’re doing well.

“Our business grew 70% last year (sales), and we are forecasting 50% growth this year.”

“We’re not a massive business so we have to be careful but we are currently looking at a Croatian villa specialist at the moment. We are looking to grow.”