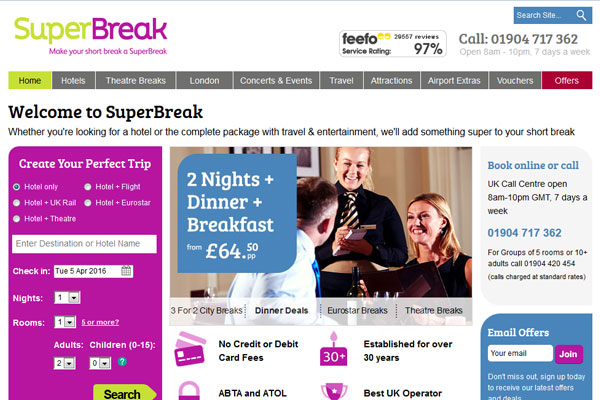 SuperBreak sought to reassure agents it remains committed to growing trade sales despite an admission from the operator’s parent company that it aims to increase direct sales on the back of a new financial deal.

Cox & Kings this week sold its SuperBreak and LateRooms brands to a newly formed company, Malvern Enterprises UK, in which it would have a 49% stake alongside an unnamed private equity partner with a 51% share.

When asked by Travel Weekly to clarify the rationale for the deal, Cox & Kings chief financial officer Anil Khandelwal confirmed that both partners in Malvern were targeting growth in “higher‑margin direct sales”.

However, SuperBreak UK and international sales director Jane Atkins moved to reassure agents that the post-sale strategy included growth in both direct and trade sales, even if the operator’s proportion of sales through the trade dropped.

Revealing that SuperBreak’s profitability had declined since the acquisition of its parent company Holidaybreak by Cox & Kings in 2011, Khandelwal said: “SuperBreak has some pretty obvious strengths, including rail connectivity and events-based packages.

“But the business was hamstrung by the lack of IT investment and direct customer-connect; it is dependent on distributors to the extent of 60% of its overall sales.

“Through this partnership [with LateRooms], we hope to be in a position to capture more of that revenue margin.”

Atkins confirmed that SuperBreak would be targeting more direct sales through LateRooms, but added: “We aim to grow the overall SuperBreak volumes with these developments.

“The travel trade is a hugely cost‑effective distribution channel for us; we will work hard with the trade to grow our, and their, business long-term.

“Both IT developments and high street brand presence will help them convert enquiries, along with the product developments that we already released and have planned for 2017.”

Khandelwal said: “The LateRooms and SuperBreak businesses have unique potential in the highly under-penetrated short and city-break markets online.

“A private equity investor who shared the vision has been brought in to provide not only financial muscle but also ‘vision over’ the integration of the two businesses.”

Referring to the expansion of the LateRooms portfolio, he added: “LateRooms has excellent cash-generation potential and also has very strong brand loyalty in the UK; at $2.50, revenues per marketing dollar spent are higher than some of the largest global players.”

As part of the deal, Malvern paid Holidaybreak £9.3 million, while Cox & Kings received £20 million for LateRooms.

Cox & Kings has a 66% stake in Holidaybreak, and acquired LateRooms from Tui Group for £8.5 million in October last year.