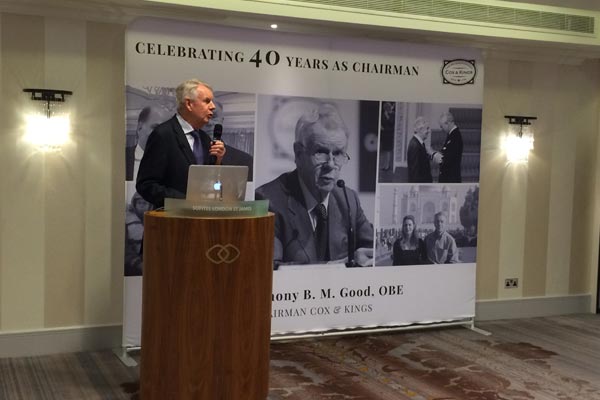 The reception was held at the Sofitel St James, in London, which once housed Cox and Kings Bank.

This year Good will take his 400th trip to India, having created the first tour to the country in 1972.

Asked what his advice would be to new travel companies starting out, he said: “It is very difficult to predict what will happen in the travel industry but an increasing amount of travel business is making its way online.

“One of the reasons we bought Holidaybreak was because companies like PGL are immune.

“The business is changing dramatically and my advice would be look back by all means, but develop the skill to move forward.”

Chief executive Peter Kerkar told the room how under Good’s stewardship Cox & Kings now has distribution in 25 countries, more than 5,000 employees and a revenue of more than $2 billion.

“I can only thank you for your selfless dedication to the job and being an exemplary chairman,” he said.

“He’s been with Cox & Kings for over 45 years now and of those 40 years as chairman of a publicly listed company, which is a tremendous achievement.

“Aside from being the chairman of the largest Indian travel company, he has contributed to opening up India’s borders to UK-based companies since the 80s and was responsible for the tie-up between Sun Life and LIC before the government had opened that route up.

“Most people will describe tony as charming, loyal, witty, but most importantly he is incredibly honourable and a man who regards friendships as sacred.

“There are many instances where I have known tony to act beyond the call of duty.”