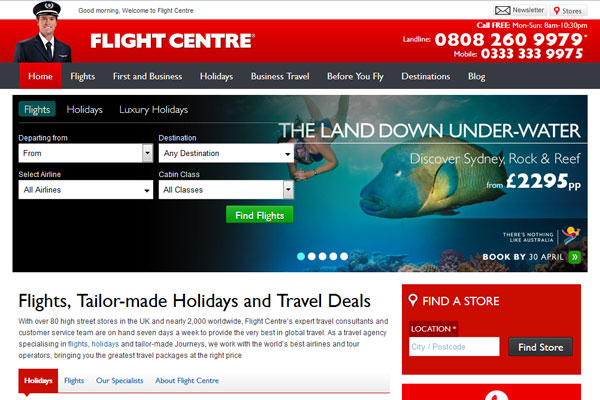 Flight Centre is being accused of charging higher prices to older customers who have little knowledge of the internet over web-savvy youngsters.

The travel agency chain also faces a claim of misleading customers over which tickets are refundable and temporarily reserving cheap seats on flights to make the price of available seats appear higher.

An undercover investigation by Channel 4’s Dispatches programme to be shown tonight (Monday) alleges that the company encourages staff to mark up the cost of flights and exploit less savvy customers.

In one incident, a reporter and his mother-in-law, aged 81, went into separate Flight Centres on the same day to request quotes for the same flight to New York, the Times reported.

Flight Centre said that the different prices appeared to be extraordinary and one isolated example.

Dispatches also filmed staff discussing “seat blocking”. Airlines usually release a limited number of seats in different price categories, so as an aircraft fills up, the seats get more expensive.

Agency staff can access the airline booking systems and place cheap seats on hold so they are no longer available. If a customer then looks online for a ticket, they will see that the price of the seats has risen. This misrepresents which seats are available, potentially pressuring the customer to make a purchase.

Flight Centre said that seat blocking was “entirely unacceptable and expressly against our company policy”, adding that the company had emailed staff to remind them last November.

The programme also filmed staff explaining how they tell customers that all flights are non-refundable even when a fare allows a flight to be cancelled with a refund.

One saleswoman was recorded saying: “My guy cancelled the other day as a ‘non-refundable flight’. It’s not. So I can make a hundred on it and still give him back money. So it looks even better.”

Flight Centre said: “The suggestion that ‘all fares are sold as non-refundable’ is completely incorrect.”

A spokesman added: “The views and recordings in this programme are not a fair reflection of our company culture or customer experience.

Dispatches’ allegation that Flight Centre has a policy or culture of applying opportunistic or excessive margins to particular customers or demographics is completely unfounded.

“We acknowledge that this programme … may highlight some isolated behaviour that is against our company policies and ethics.”