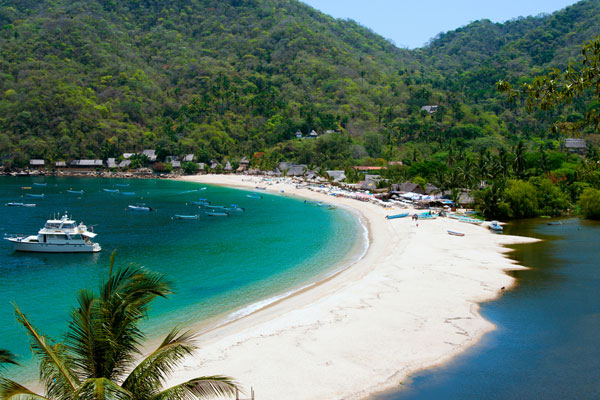 Mexico (pictured), the US, Dominican Republic and Mauritius have shown a dramatic surge in popularity as a third (31%) of travellers plan to switch away from France and Greece this year, booking data from Club Med shows.

Almost half (47%) of the those are doing so as a direct result of recent European security scares including the terrorist attacks in Paris and Brussels – with 53% of people citing safety as their top concern when making holiday plans.

France has almost halved in popularity as a holiday destination in the past year (45%), with Turkey down by more than a third (38%) and Greece down by 16%.

Almost three in five people (56%) research recent news surrounding potential destinations before travelling and nearly one in 10 (6%) have cancelled or changed a holiday in the past due to safety concerns, according to the study.

However, safety worries are not the only factors affecting holiday choices. Wanting to explore the destination (54%), the length of flight (37%) and local events such as carnivals and festivals (15%), are all key to Britons.

Good value foreign currency (34%) such as that of the South African rand, and cost of flights (49%) were also cited as key influences when choosing a destination.

A third (32%) feel that long-haul is now better value than three years ago, with 30% believing flights have gone down in price in the same time period.

This is reflected by Club Med’s own offers, with a week-long holiday to Punta Cana in the Dominican Republic starting at £1,134 per adult, compared to £1,944 for the same period in Gregolimano, Greece.

More than a third (37%) of travellers also feel long-haul destinations are now more appealing than holidays in Europe, compared to two years ago.

Ten per cent of people plan to head to an international sporting event, such as the 2016 Olympics in Brazil, with nearly two thirds of visitors (60%) planning to visit other parts of the country while there.

Club Med claims its bookings reflect the trend towards long-haul with bookings up 227% year-on-year to the Caribbean, Mauritius up 185%, Brazil up 165% and Punta Cana up 66%. Bali and Mexico bookings have also increased 104% and 50% respectively.

UK and Scandinavia managing director, Estelle Giraudeau, said: “While different countries have always gone up and down in popularity, the trend in recent months for British families to choose a long-haul destination over a shorter trip to Europe is really evident.

“A combination of global sporting events, cheaper long-haul travel, and geopolitical activity has led to many of our long-haul resorts being booked up months in advance.

“But it’s not just travellers in general looking to go long-haul. We’ve noticed an increasing demand from families specifically looking to travel further abroad. As a result we have already made our two resorts in the Maldives, Finolhu and Kani, family friendly to meet this demand in recent months and are always looking at our offering to ensure we offer the best possible experience for our customers.”