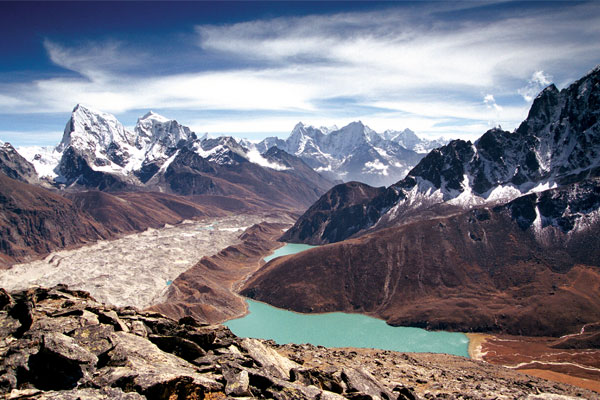 Nepal is getting back on its feet following the earthquake, discovers Meera Dattani.

“I guided 14 tours between September and April before the earthquake,” says Satya Kumal, a long-time guide based in Kathmandu. “This season, seven.”

For all Nepal’s beauty and diversity, the earthquake naturally dominates conversation: villages crumbled, temples tumbled and an estimated 9,000 people lost their lives when a 7.8-magnitude quake at Barpak, Gorkha, on April 25 last year triggered an avalanche on Everest. “But the media misrepresented things,” he says. “They didn’t show how much was left.”

His wide smile in the face of adversity epitomises everything about the Nepalese. A year on, government funds may be slow to deliver, but tourism is playing a key role in the recovery effort, and the injection of energy from responsible tourism providers such as Intrepid Travel – which chose Nepal as the host country for its first ‘Intrepid Loves Agents’ fam trip – is making all the difference.

It’s not rocket science as to why Nepal is such a centre for adventure travel: mere thoughts of the Himalayas stir even the jaded traveller, so for trekkers, it’s the holy grail. Yet Nepal caters equally to the cultural tourist, and this is a growing strand of travel to this diverse country.

Towns such as Kathmandu and Bhaktapur are as intoxicating as any in Asia, while striking indigenous Newari architecture, Tibetan monasteries, Hindu and Buddhist temples and terraced rice fields span the country. Lakeside Pokhara attracts visitors seeking relaxation and adventure, and Chitwan National Park tempts tiger-seekers, while the Nepalese themselves – humble, resilient and kind – top the experience everywhere you go.

Industry and media support have been key to Nepal’s tourism recovery, and recent visits by Prince Harry and David Beckham were also well-received. Intrepid Travel worked with engineering company Miyamoto International to assess its trekking routes, and reinstated its full programme even before the Foreign & Commonwealth Office changed its advice in October 2015.

Intrepid’s UK managing director, Michael Edwards, says: “As the largest operator in Nepal, the country is incredibly important to us. After the earthquake, we pledged to donate all 2015-16 season’s profits to local projects, and to date, we’ve raised £380,000.”

The operator works with grassroots projects such as Seven Women in Kathmandu, which provides employment, skills and support to marginalised women, and cooking classes and crafts to visitors.

As one Nepalese tourism professional told me: “We need trade, not aid.” This is a sentiment echoed by many, underlining the need to bring tourists back to the region.

Edwards adds: “Travellers are starting to return, but it’s a long way before it reaches pre-earthquake levels. Tourism is vital. That’s why we wanted to show agents that Nepal is open for business, and as magical as ever.”

Those who visit are richly rewarded. Town after town, trek after trek, temple after temple, proud Nepalese welcome visitors with open arms and big smiles. Be it for culture, food, Everest the peak or Everest the beer, this mountain kingdom is ready and waiting.

In the hectic capital, Unesco World Heritage Site Durbar Square is the main attraction for locals and visitors. While many structures were damaged, plenty remain, with monastery compounds (bahal), the Old Royal Palace, museums and courtyards alongside Hindu temples and Buddhist stupas (places of meditation).

North of here, Asan’s markets and alleyways characterise Old Kathmandu, before morphing into the lively tourist centre of Thamel. Close by is the Royal Palace, site of the 2001 royal massacre, which marked the beginning of the end of Nepal’s monarchy, and the landscaped Garden of Dreams.

Other spots worth visiting include the hilltop Swayambhunath temple, which is renowned for its stupas, monkeys and views. Patan, four miles south of Kathmandu, is less hectic, with the main square its key attraction. As a base for expats and NGOs, Patan has some outstanding restaurants and craft shops.

Accommodation includes the historic Kathmandu Guest House in Thamel, with its garden haven, and the top-end luxury at Dwarika’s Hotel, Shangri-La and Hyatt Regency.

Once you escape the city, this region is rich in sights, with magical experiences such as the Hindu temple complex Pashupatinath, where religious songs, funeral pyres, wandering sadhus and last rites on the riverbanks culminate in an evening light-offering ceremony.

To the east is the pink-hued town of Bhaktapur, whose medieval centre is one of Nepal’s best-preserved, with the Palace of 55 Windows on Durbar Square and Nyatapola, Nepal’s tallest temple, in Taumadhi Square. Pick up souvenirs direct from the artists in Pottery Square, or at woodcarving and papermaking workshops.

At Boudha, reconstruction work is ongoing on the white Buddhist stupa, one of the world’s largest, while nearby Shivapuri National Park offers excellent walking and biking.

Spanning outwards into the Central Hills are towns such as Nagarkot, which has expansive Himalayan views, Tibetan Buddhist site Namo Buddha, and hillside Nuwakot. Badly hit by the quake, Nuwakot has Nepal’s most evocative palace complexes and the beautiful Famous Farm, a renovated guesthouse run by Rural Heritage, whose mission to revive countryside tourism includes funding some of the town’s reconstruction.

Sinking an Everest beer over mountain views by Phewa Lake, or ambling along the touristy Lakeside aren’t bad options in Pokhara, a 45-minute flight or six hours by road from Kathmandu.

Pokhara caters to all, with canoeing, yoga and day hikes, as well as rafting, mountain-biking and microlight flights for the more adventurous. It’s also a jumping-off point for longer treks, so make the most of comfortable accommodation such as Fishtail Lodge, Tiger Mountain Pokhara Lodge and the central Hotel Barahi.

Away from Pokhara, Sarangkot offers the best views of a Himalayan sunrise, while Bandipur has a remarkable ridgetop location, old bazaar street, boutique hotels such as The Old Inn and homestays.

Gorkha, where the elite Gurkha soldiers hail from, has an impressive temple complex that’s worth the journey to see.

Chitwan National Park and the Terai

The flat strip along southern Nepal is home to Buddha’s birthplace Lumbini, the tea gardens at Ilam in the east, the lesser-visited but wildlife-rich Bardia National Park in the west, and Chitwan National Park.

With almost no poaching, Chitwan is a haven for the once-endangered Asian one-horned rhino, birdlife, sloth bears, Indian bison, deer and elusive tigers and leopards. Suggest guided canoe trips to see mugger crocodiles, and stop at the gharial crocodile breeding project on a Jeep safari.

Spectacular and spiritual, the towering Himalayan peaks epitomise Nepal. Most trekkers head to the Annapurna region for the accessible Annapurna Sanctuary trek, while Everest Base Camp attracts a quarter, lured by the dramatic flight into Lukla and the mountain villages of Namche Bazaar and Khumbu.

The views, the Buddhist-Sherpa culture, teahouse stays and promise of personal achievement remain the big pulls for trekking here. By travelling with a reputable company, you know you’re contributing to fair wages for Sherpas and porters, so the local community also benefits from tourism.

Nick McGreevy, assistant manager, Round the World Experts
“I thought Nepal was more about trekking, but we experienced music, culture, countryside and great people. I’d suggest Nepal to anyone – trekking and rafting for adventurers, temples and culture for others.”

Eleanor Hopkinson, travel specialist, Footloose Travel
“I expected it to be like India, but it’s less of a culture shock. There’s so much to see and Nepalis are so appreciative of visitors. I’m even considering Everest Base Camp myself.”

Suzanne Partridge, travel consultant, Nomadic Travel
“Chitwan National Park, the gorges, people and temples – Nepal is a personal favourite. It’s rare that our clients don’t go back. The best thing agents can do is encourage visitors and small-group tourism to help the Nepalese.”

For mountain visibility and comfortable temperatures, autumn (September to November) and spring (February to April) are the best time to visit. Winter is cold but not off-limits, and while the pre-monsoon and monsoon heat (May to September) is challenging, fresh air and lush fields are enough to tempt some.

There are no direct flights to Kathmandu, but Jet Airways, Qatar Airways, Etihad, Emirates and Air India offer short transits from their respective hubs.