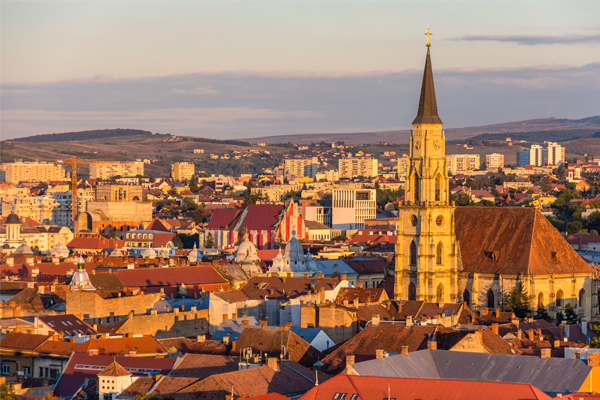 Romania’s second largest city of Cluj has started to be served by flights from Liverpool John Lennon airport.

The twice-weekly service is being run by Romanian low-cost carrier Blue Air.

Cluj, with a population of around 330,000, joins Bucharest and Bacau on the airline’s network from Liverpool.

The city is also considered to be the to the unofficial capital of the historical province of Transylvania with links to the fictional character Count Dracula.

Blue Air will operate a fourth weekly service to Bucharest from Liverpool while Bacau will be served throughout the winter.

The airline’s chief commercial officer, Tudor Constantinescu, said: “It is indeed a proud moment for us at Blue Air to launch our maiden international flight between Liverpool and Cluj-Napoca, a city in the heart of Transylvania.

“There is a strong demand in travel between Romania and the UK from the Romanian community, while visiting friends and relatives in Romania.

“With the emerging IT industry and trade between the two countries, and especially in Cluj-Napoca, we are looking forward to playing an important role in supporting the ongoing economic growth and development of the second most populous city in Romania.”

Liverpool airport air service development director, Mark Povall, added: “Since commencing their first departure from Liverpool just under 18 months ago, Blue Air have steadily grown their business from Liverpool, carrying over 60,000 passengers on their existing two routes in this time.

“We are naturally delighted to see this further expansion of their business from here and look forward to continuing to work with them closely to explore further opportunities from Liverpool.”