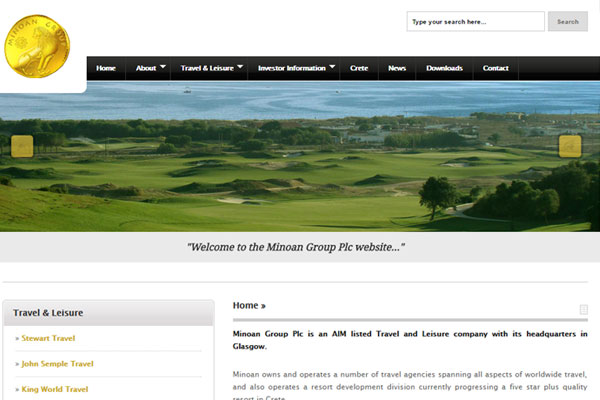 Scottish-based Minoan Group’s travel and leisure division has seen a gross profit increase of 19% in its interim results.

“This has been achieved against the negative background of reduced demand in our market in Turkey as a result of security concerns,” said Minoan chairman Christopher Egleton.

The Stewart Travel parent is continuing to pursue the development of a project on the Cavo Sidero peninsula in Crete, which will include a number of small to medium sized hotels “of extremely high standards”.

Egleton said: “We are encouraged by the shortest possible delay in the hearing of the appeals against the issuance of the Presidential Decree [the equivalent of outline planning permission] granting outline planning consent for the project in Crete.”

The Presidential Decree was issued on March 11 2016.

He continued: “The general situation in Greece appears to have become more stable.

“Funds from the current Bailout have been released and the banks have been recapitalised…in light of the Greek government’s continued support for Foreign Direct Investments, we continue to make progress with the [above] project itself as well as with a number of discussions taking place with potential partners and financing institutions.”

Investments have been made in ‘soft’ infrastructure and in June a new hi-tech service centre opened in Ayr to facilitate “the ongoing growth of our web based businesses, which now account for roughly two thirds of our total transaction value”.

Egleton continued: “We continue to progress various options to facilitate future growth for the travel business, particularly through acquisitions, for the best advantage of the group as a whole…discussions regarding the plans for our travel business are in progress with advisors and others.”