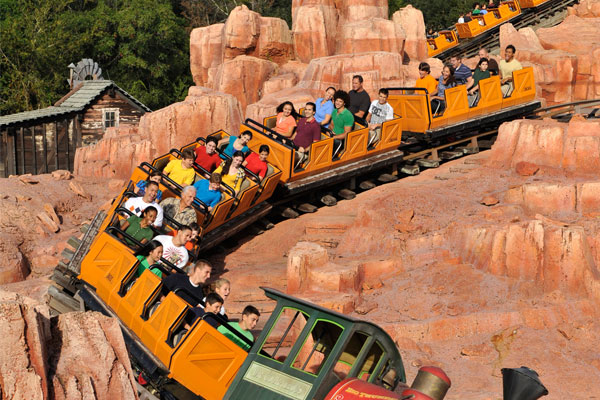 I’m not sure who was more excited as we stepped into Pixie Hollow – my six-year-old daughter getting to meet her all-time heroine, Tinker Bell, or my 73-year-old dad watching the look on his youngest granddaughter’s face.

As we walked past enormous plants and tree roots, and 6ft-high buttons, keys and cotton reels, deep into the dark tree stump where the tiny green fairy was waiting, it was impossible to be cynical about the magic of Disney. Here was a dream come true taking place right in front of us.

My daughter Marijke got a cuddle, an autograph and a sprinkling of pixie dust from Tink; Grampy got to witness her sheer delight; and I saw how easy it is for Orlando to cast its spell on the whole family, no matter their age. 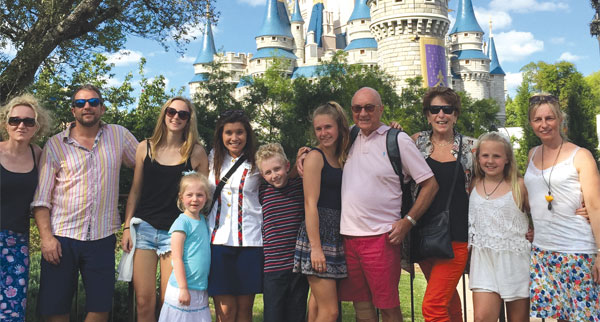 The Tinker Bell ‘meet and greet’ experience in the Town Square Theatre, off Main Street in Disney’s Magic Kingdom, was the first of many memorable experiences I got to share with my extended family on a two-week Orlando holiday.

I travelled with my dad Trevor and step-mum Gloria, plus my sister and brother-in-law, three nieces ranging in age from 10 to 15, and my own children, aged 10 and six.

I’ll admit I was nervous that we might struggle to agree on what to do each day to keep everyone happy, but I needn’t have worried. The phrase ‘there’s something for everyone’ is hackneyed of course, but in the case of Orlando, it really is true.

Unsurprisingly, my nieces were a little past meeting characters and more into thrill rides (although that said, the many parades and shows were popular with us all), but in every park, wherever there was a rollercoaster, there also seemed to be a gentler attraction for younger kids right next door.

This careful design and planning meant one of us could always take my daughter to do something else rather than have to just wait with the bags. So while the others rode Big Thunder Mountain Railroad in the Magic Kingdom, Marijke enjoyed some hoedown fun in the Bear Jamboree.

She practised spells with her new wand from Ollivander’s in Universal Studios’ Diagon Alley, while her cousins rode the Harry Potter and the Escape from Gringotts simulator.

And my sister was more than happy to give the Rock ’n’ Rollercoaster at Hollywood Studios a miss, to take Marijke to the Beauty and the Beast Show – much to my delight, as the Aerosmith-inspired coaster is one of my favourite rides ever.

Whether dad and Gloria were quite as keen is debatable, but they gamely braved the 0-to-57mph in 2.8 seconds start, and a loop-the-loop at 4.5G, to share the adrenaline rush with us all. 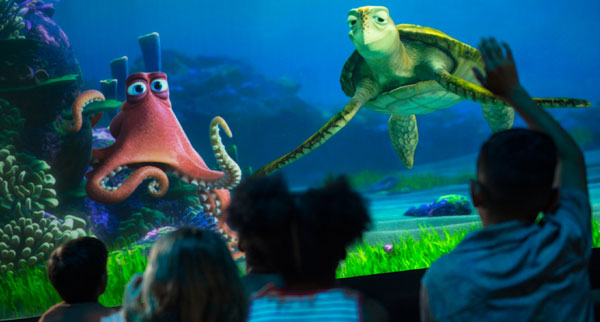 Many other attractions were suitable for all ages. We all loved Epcot’s Test Track, where you design a virtual vehicle and put it through various assessments including a high-octane speed trial, while Turtle Talk with Crush, a clever and amusing interactive Q&A with the much-loved reptile from Finding Nemo, was totally awesome, dude.

Another whole-family hit – in more ways than one – was the Toy Story target-shooting ride at Hollywood Studios, as was the hilarious Minion Mayhem simulator at Universal. Even old favourites such as Pirates of the Caribbean in the Magic Kingdom have been brought up-to-date with a new Johnny Depp/Captain Jack Sparrow puppet for older kids to try and spot.

If clients need a rest from endless rides and attractions, a stroll around Epcot’s World Showcase – 11 pavilions based on different countries set around a massive lagoon, is great for some downtime, especially if the ‘oldies’ are flagging a bit. To circumnavigate the entire lake is quite a walk, so we kept our younger kids entertained with The Disney Duffy Bear Trail, where each child gets Mickey’s teddy bear on a stick, and has to colour him in as they progress around the countries, collecting a flag and a stamp from each pavilion or colouring station as they go. Simple but highly effective.

We ate lunch at Teppan Edo, a fabulous restaurant in the ‘Japan’ section, serving teppanyaki-style food. Our chef, Nagatoshi, made the $35-a-head meal pure theatre, tossing the stir-fry into the air from the hot plate that all nine of us were seated around, and building a steaming volcano out of onion rings. The highest-quality food coupled with an entertainment and sensory masterclass. Genius – and a must for all families. 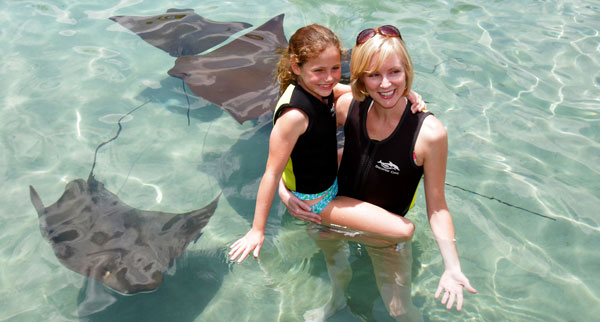 Another fantastic way to build a restful interlude into a packed itinerary is to book a day at SeaWorld’s Discovery Cove.

The resort offers a range of animal encounters in a stunning and restful lagoon setting. Yes, it’s man-made, which may not appeal to some, but with numbers limited each day, it never feels overcrowded – and it was a welcome break from some of the more hectic days in our schedule.

And the whole family could do everything available, regardless of age or ability – from swimming with bottlenose dolphins and feeding tropical birds that landed on our hands, to snorkelling through a saltwater reef among stingrays and a plethora of colourful fish.

Visitors can also just drift down a lazy river, inches from families of otters, or swing in a hammock overlooking the lagoons, rocky outcrops and white-sand beaches. Apart from a reserved dolphin-swim time, everything else is at your leisure, so it couldn’t be more relaxed.

And while I know swimming with dolphins is most guests’ highlight, mine was watching my daughter overcome her fear of snorkelling to eventually spend two hours face down in the reef, loving every minute. The sense of achievement for her was fantastic – and it was a joy for the rest of us to see.

Equally special was the Antarctica: Empire of the Penguin Up-lose Tour at SeaWorld Orlando. This phenomenal 45-minute behind-the-scenes experience involves meeting the marine biologists who look after these unique birds. After piling on extra clothing to enter the penguins’ sub-zero environment, we stroked Whopper the king penguin (and his mum Burger), and also Joey the little rockhopper penguin. Fantastic and educational fun.

The experience costs $59 for adults and older children, and $39 for three to nine-year-olds.

For a wilder up-close-and-personal encounter with nature, suggest clients head to Kissimmee, and to the alligator swamps of Boggy Creek for a taste of the real Florida.

Here, they can take an exhilarating air-boat ride through the Everglades, skimming the surface of the water at up to 45mph. We donned ear-defenders then jumped into the boat with our hugely knowledgeable – and heavily tattooed – captain and guide Jim, who tracked down a four-foot alligator, a massive green water snake, a blue heron, a red-winged blackbird and a white pelican.

We’d booked it mainly for my nature-loving dad, but the kids loved it too. It’s a thrill ride with a difference, and definitely worth the $45 for adults and $40 for children for an hour. The trip is also available at a discounted rate with the Orlando Explorer Pass, which starts at £63 for adults and £53 for three to 12-year-olds with Attraction World. 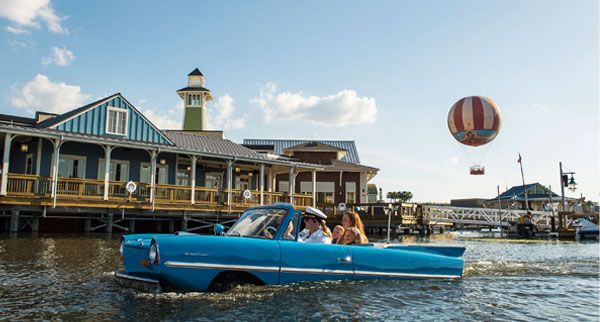 One of my biggest surprises was the renovation of Downtown Disney into Disney Springs. The entertainment and dining complex had a much more family-friendly, relaxed vibe than before, making my sister comfortable to let her two older daughters (13 and 15) wander off by themselves after an amazing dinner at The Boathouse (specialising in steak and fish), to buy ice cream or go people-watching at Ghirardelli Chocolate Shop.

We ended our holiday by keeping the kids up late to watch the Main Street Electrical Light Parade, in the Magic Kingdom, followed by an impressive light and fireworks display over Cinderella’s Castle. I remember seeing it when I was my kids’ age, and it had lost none of its charm 35 years later.

The memories of being taking to Orlando by my parents when I was eight have stayed with me to this day. Going back with my dad, sister, nieces and kids was even better.

Funway Holidays offers seven nights in a three-bedroom villa with pool from £1,059 per person, including BA flights from Heathrow, mini-van hire and Orlando FlexTicket. The price is based on four adults and two under-12s in October half-term. funway4agents.co.uk

Volcano Bay water park, which opens in June, is on sale as part of Universal Orlando Resort’s 3-Park Explorer Ticket