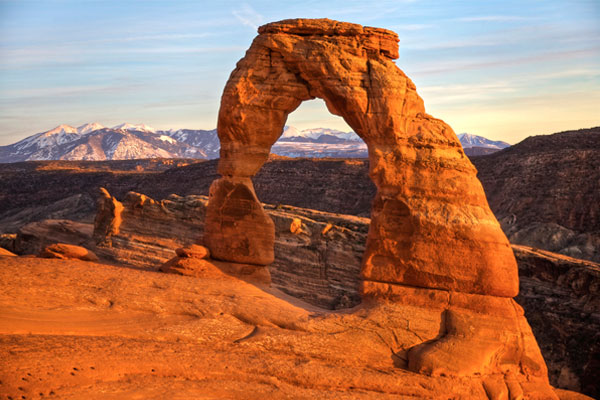 Saying ‘the road to Moab is four hours long’ sounds like the opening of a heart-wrenching Nat King Cole ballad, but the scenery along this stretch of road is so beautiful and thought-provoking, it could inspire a song in anyone.

I was on my first trip to Utah – having arrived by way of Delta Air Lines’ inaugural flight from Heathrow to Salt Lake City, a route launched earlier this year – and after spending a whirlwind few days in the city of the saints, I was about to enter the second and very different phase of the trip. Lured by the promise of burgers so good they’re famous state-wide, plus some gnarly outdoor pursuits in Utah’s vast national parks, there was a lot to look forward to. 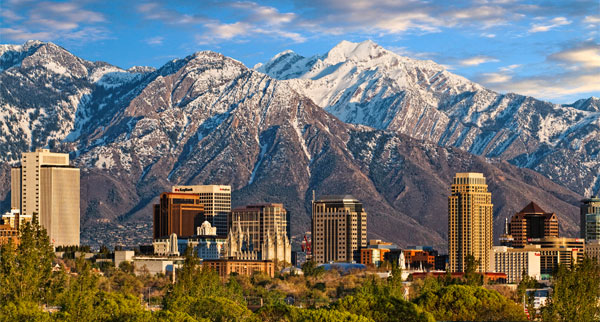 Delta Air Lines’ new 11-hour flight – the first direct service from Heathrow to Utah’s capital – began in April, and was a source of much excitement when I arrived, with small shop owners in downtown Salt Lake voicing their enthusiasm for the commercial potential of the new link-up.

After a hassle-free airport experience and quick transfer downtown, by 7pm we had checked in to the very trendy Hotel Monaco (Where to Stay, page 69), and were making our way to dinner at Squatters Pub Brewery. It was Sunday and the streets were quiet, but the street art, craft brew bars and buzzing restaurants painted a picture of a young, interesting, up-and-coming city.

The state capital was founded by Mormon followers in the mid-19th century and still has strong links to the faith today. Consequently, until fairly recently, there were strict rules surrounding nightlife conduct and the selling of alcohol. These have relaxed as more young people have moved to the city from surrounding states to set up breweries, cafes and bars, but it is still worth reading up on the rules before a night on the town. 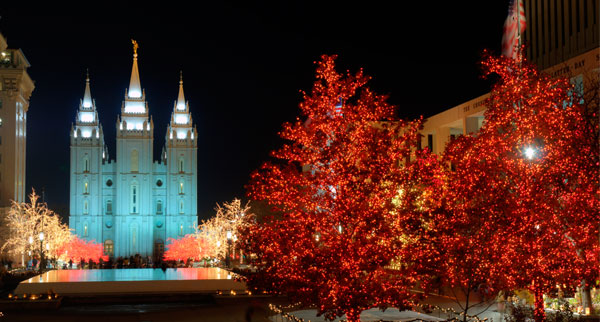 Salt Lake City has found the perfect balance between heritage and hipster allure, with the added bonus of never being more than 40 minutes from the slopes. Hosting the 2002 Winter Olympics cemented the city’s status as a must-visit for any winter sports aficionado. There is a massive ski and extreme sports culture, and our enthusiastic host was forever trying to convince us to don our boots and hike up the Wasatch Mountain range to the northeast of the city.

Instead, we took an altogether easier approach the next morning, letting the friendly, knowledgeable tour guides of the Salt Lake City Bike Taxi Company pedal us around the key sights, sitting in comfortable carriages at the back while they did all the hard work. By day, the city is vibrant but not busy, and even the newly developed City Creek shopping centre had an air of calm.

The pedicab trip concluded at Temple Square, a large Mormon microcosm in the heart of the city, at the centre of which is Salt Lake Temple, the largest of its kind in the world. The gardens are beautifully maintained and incredibly peaceful despite the large number of tourists. The temple itself has become a major attraction, and regular tours are given by welcoming Mormon guides. 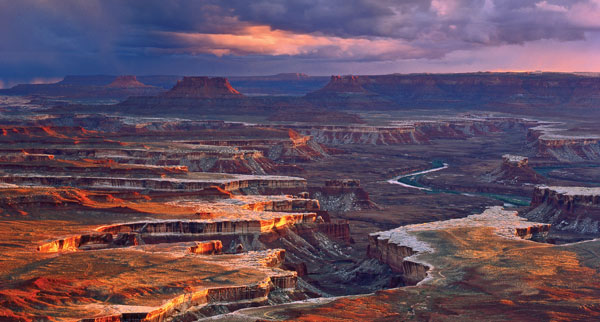 The next day heralded our journey east, skirting the Manti-La Sal National Forest and weaving through the southern Rocky Mountains. Bikes, skis and boards of all kinds were strapped to the cars and mini pick‑up trucks headed to Moab, and as we approached, the view changed from built-up craggy escarpments to sweeping plains of towering red-rock monuments. I had never seen anything like it, and not for the last time during my stay in Moab, I was struck dumb by the beauty of the landscape.

The ‘Mighty 5’ are Utah’s five national parks: Arches, Canyonlands, Capitol Reef, Bryce Canyon and Zion. These staggering parks provide perfect terrain and inspiring surroundings for a host of adventures and activities. The parks are accessible with regular buses taking visitors to the information centres and walking trails.

Of the Mighty 5, Moab is home to Canyonlands and Arches, and it was at the entrance to the latter that our guide from the Moab Area Travel Council talked us through the natural wonders we were about to encounter on the two-mile hike to Landscape Arch.

All around us, delicate arches rose out of the red rocks forming keyholes through which we could see distant lofty peaks. Massive boulders balanced on thin fragile pillars or hung, seemingly suspended, at the edges of cliffs. It felt like we were walking on another planet or a sci-fi film set. 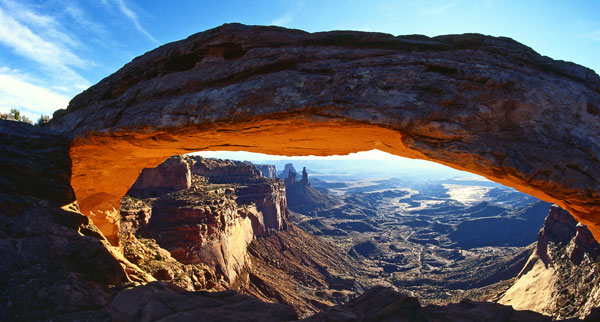 A quick word to the wise: it can get very hot and dusty. Take plenty of water; wear lots of sun cream. I was smothered in a full layer of factor 50 and still ended up a little rouge, and that was on an uncharacteristically cloudy day.

That said, this is something that can be experienced by anyone and there is no time limit. There were young children galloping over the rocks, mountain bikers hurling themselves down terrifying slopes, and people with walking sticks taking their time to admire the scenery.

And if there’s one scene you don’t want to miss, it’s Landscape Arch at sunrise. The day after our hike, we returned at the crack of dawn and saw golden sunlight explode over the stunning burgundy plains, the early morning mist drifting through the soaring structures and over the green gorse bushes. It’s an experience I will never forget.

There are plenty of ways to experience the two parks in Moab, but a couple stand out in particular. The Hummer Slickrock Safari is an exhilarating bumpy trip around Moab’s backcountry, with great views of Arches National Park and the Colorado River. And the Canyonlands by Night boat trip, which is a gentle meander down the Colorado River with an excellent sound and light show telling the story of the canyon’s formation, creation and history.

Moab town has some excellent restaurants and bars, with names like Frankie D’s, Eddie McStiff’s and Woody’s Tavern. Atomic Moab Burger is an absolute must for burger and beer fans. There are live music venues, outdoor gear shops and stalls selling all sorts of rock-related curios. This could be an adventurous family’s week-long holiday, or a weekend stop for a group of thrillseekers on the way to Las Vegas, Arizona or Salt Lake City.

I was sad to leave and immediately eager to return; Utah offers a hugely diverse mix of experiences and four days was only enough to scratch the surface. I’m yet to write that ballad, The Road to Moab is Four Hours Long, but as soon as I do I’ll head straight back to Frankie D’s to perform it – if they’ll have me. Which they probably won’t.

Find out more about what to do, where to go and how to get to Utah at visitutah.com/uk

Hotel Monaco, Salt Lake City:This large, trendy hotel is in the heart of downtown Salt Lake City. Part of the Kimpton Hotel Group, it has the simple elegance of a small boutique with the gym, spa facilities and customer service of a larger group. Rooms are airy and elegantly furnished, with high ceilings and classy upholstery. Rooms from $249. monaco-saltlakecity.com

Gonzo Inn, Moab:The sort of place you want to relax in after a hard day’s hiking, the Gonzo Inn is in the centre of Moab and close to other attractions. Rooms have microwaves and fridges in case you fancy whipping up something from the convenience store opposite, and there is a spa tub and seasonal outdoor pool. The atmosphere is relaxed and informal. Perfect digs for would-be adventurers. gonzoinn.com

North America Travel Service offers a seven-night break to Utah from £1,499 next March, with return Delta Air Lines flights, three nights at the Hotel Monaco in Salt Lake City and four at The Gonzo Inn in Moab plus a week’s car hire from Alamo including GPS and insurance. northamericatravelservice.co.uk

Delta Air Lines began flying direct from Heathrow to Salt Lake City on April 24, with daily services in summer and flights up to four times a week in winter on a Boeing 767-300. Economy fares lead in at £566 and Delta One prices from £3,438. pro.delta.co.uk