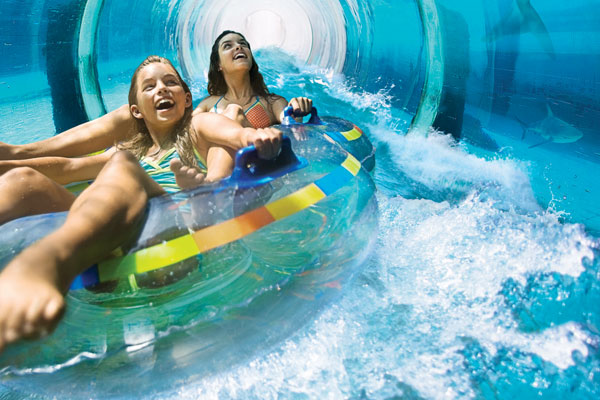 With so much to see and do, families are spoilt for choice, says Aby Dunsby.

Dubai might be about glitz and glamour, but that doesn’t make it a no-go for families.

Quite the opposite, in fact: few destinations boast such a welcoming attitude towards kids and an expansive family-friendly offering, from glistening shopping malls and desert safaris for teens, to vast resorts with water parks and theme parks for the younger ones.

Year-round warm weather, an expanding all-inclusive hotel portfolio and a host of child-friendly activities also explain why the destination is so popular with families looking to keep the whole brood entertained. Here we round up the best family attractions the emirate has to offer. 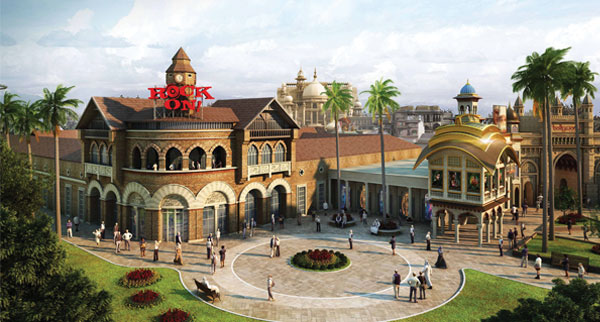 From the end of this month, Dubai is set to give Orlando a real run for its money with the opening of mega theme park Dubai Parks and Resorts, which integrates three separate parks: Motiongate Dubai; Bollywood Parks and Legoland Dubai, plus a Legoland Water Park.

For teens, Motiongate Dubai in particular will be a huge draw, featuring a host of adrenaline rush-worthy rides and attractions inspired by Hollywood movies including The Hunger Games and Kung Fu Panda. Legoland Dubai is bound to be a hit with the youngsters, featuring 15,000 Lego models and 40 themed rides, while fans of cinema shouldn’t miss the one-of-a-kind Bollywood Parks Dubai. Finally, water babies can enjoy thrills without the spills at Legoland Water Park, the region’s first water park aimed at kids aged two to 12. 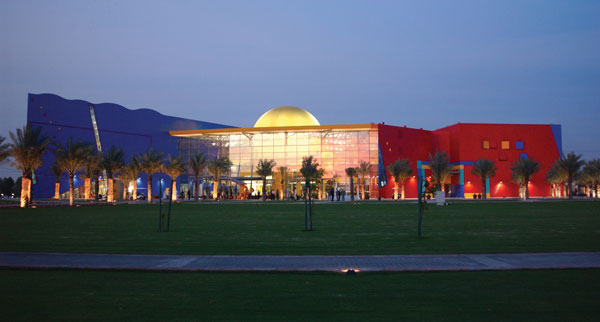 Learning is all about having fun at Children’s City in Dubai Creek Park, an educational city with interactive learning stations geared towards kids aged two to 15.

For tots, play is about discovery, with building blocks, sandpits and water pools, while bigger kids can learn about space, the human body, science and tech via interactive displays and games. The star attraction has got to be the flight simulator, allowing kids to don an outfit and ride a camel, a magic carpet, or an aircraft. The centre also runs daily educational workshops and planetarium shows, competitions and story events. Outside, there’s a playground and the chance for kids to enjoy camel and horse riding, too. 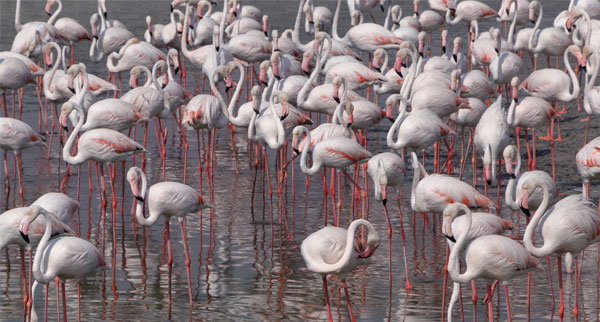 A haven of tranquility amid the city hubbub, this bird sanctuary is made up of 2.4sq miles of natural landscape made up of mangroves, mudflats, salt flats and lagoons bordering Dubai Creek, and is great for nature-loving families.

In winter, more than 5,000 pink flamingos steal the show, and it’s impressive to see the birds in their natural habitat as they feast on algae from the nutrient-rich waters. (In summer, their numbers dwindle as many move northwards to avoid the heat).

The flamingos share the reserve with more than 270 bird species, including herons, eagles, kingfishers and egrets, which clients can spot from one of two hides.

Book it: Entry to this area is free. visitdubai.com/en/pois/ras-al-khor-wildlife-sanctuary 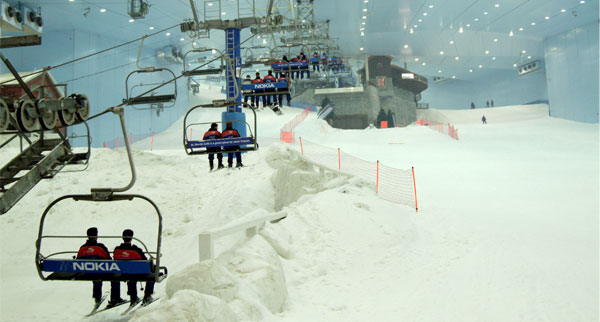 4 Ski Dubai at Mall of the Emirates

When the sunshine gets too much, clients can cool down in the city’s very own winter wonderland – Ski Dubai.

The Middle East’s first indoor ski resort boasts five runs of varying difficulty for clients to ski and snowboard down, plus a 150 metre-long zip-line, the Snow Bullet, which allows clients to soar up to 16 metres above the slopes.

For younger kids, there’s also a park with toboggan slopes and snow caves to explore, and they’ll love meeting the colony of cute snow penguins that make a daily march through the park.

The alpine cafe is ideal for sipping a hot chocolate while watching people have their ski and snowboard lessons, and if they’ve still got energy to burn, there’s the Mall of the Emirates’ countless shops, department stores and food courts to scour.

Book it: A one-hour lesson at Ski Dubai costs £37 for adults and children with Attraction World. attractionworld.com 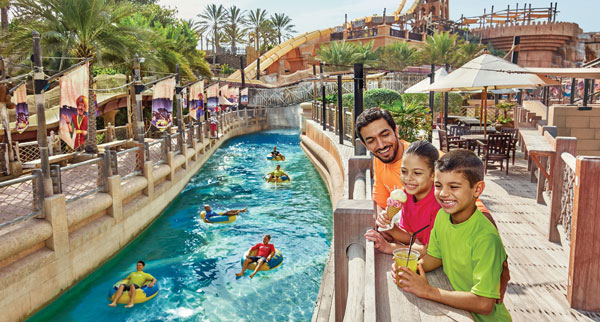 This water park is one of Dubai’s most popular tourist attractions thanks to its fantastic location and choice of more than 30 rides and attractions.

From the top of Jumeirah Sceirah, a knee-trembling 32-metre-high slide, clients can see the Burj Al Arab and the Arabian Gulf, before they feel the ground open beneath them as they plunge down the white-knuckle tandem slides.

There’s plenty for babies and toddlers to enjoy too, including a children’s play area and lazy river. Entry is free for clients staying at Jumeirah Beach Hotel. Make sure clients know the park is closed from January 14 until February 9, 2017, for refurbishment, to avoid disappointed kids.

Book it: Gold Medal offers three nights’ half-board at Jumeirah Beach Hotel in an Ocean Deluxe Room from £769 per person, based on a family of four, and including flights and free access to Wild Wadi Waterpark, for travel between February 6-27, 2017. goldmedal.co.uk 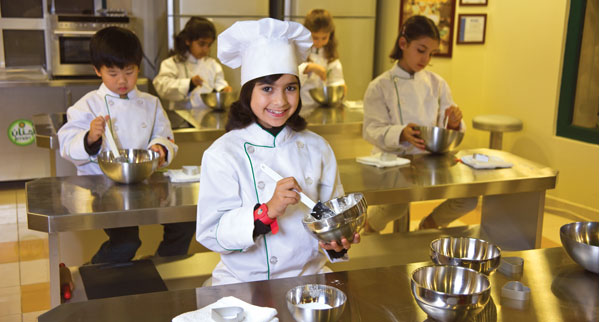 There’s a reason that playing ‘mummies and daddies’ is such an enduring game for kids: they love pretending to be grown-ups, and KidZania has cleverly cottoned on to this concept in its ‘edutainment’ park for two to 12-year-olds.

The premise revolves around kids pretending to do adult jobs for the day. Unlike conventional theme parks, KidZania does away with rides and instead creates a mini-city where kids can play at being everything from a fireman or a doctor, to a TV presenter or a model.

Kids must also learn about their job from a ‘Zupervisor’ and they can then have fun raiding the fancy dress box and dressing up in a uniform for their chosen occupation. They’re even paid for their endeavors in KidZos, KidZania’s own currency, which they can spend in the shop.

Book it: Entry to KidZania costs from £20 for toddlers aged two to three, £30 for children aged four to 16, and £20 per adult. kidzania.ae 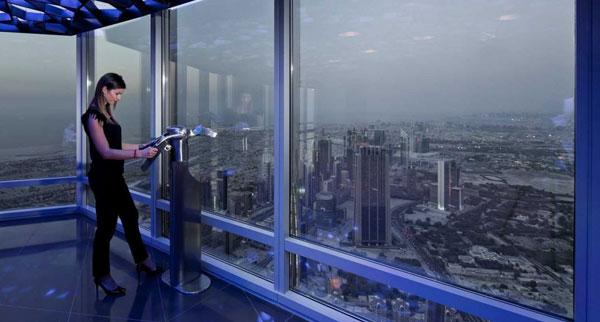 A trip to Dubai isn’t complete without a visit to the world’s tallest skyscraper, which soars high above the emirate’s sparkling skyline at 160 storeys.

The cheapest and most popular viewing option is At The Top, visiting the observation deck on the 124th floor. As well as staggering 360-degree views of skyscrapers, desert and ocean, the experience also includes a multimedia presentation about Dubai and the building of the Burj Khalifa.

Those looking for a premium experience can opt for At The Top Sky on the 148th floor, a VIP trip that includes refreshments in a private lounge and a guided tour. 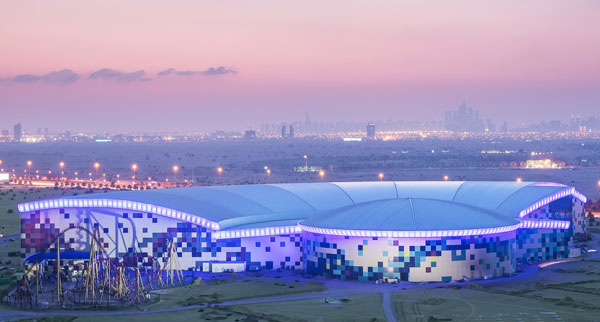 The city of superlatives has just gained another thanks to IMG Worlds of Adventure, a 1.5 million square foot indoor theme park – the largest of its kind in the world – that opened in August.

The giant funhouse is made up of four zones including the Marvel area, which features rides from Spider-Man, Thor and The Avengers; and a Cartoon Network zone, which is targeted at younger children and features a vast 5D cinema.

The bravest should head to Lost Valley, an area dedicated to the world of dinosaurs, which boasts the The Velociraptor, Dubai’s fastest and tallest coaster. The ride shoots clients out of the park and into the desert, hurtling them forwards at an acceleration of 0 to 100mph in 2.5 seconds.

Book it: Park admission costs £58 per adult and £48 per child under 1.2 metres. imgworlds.com 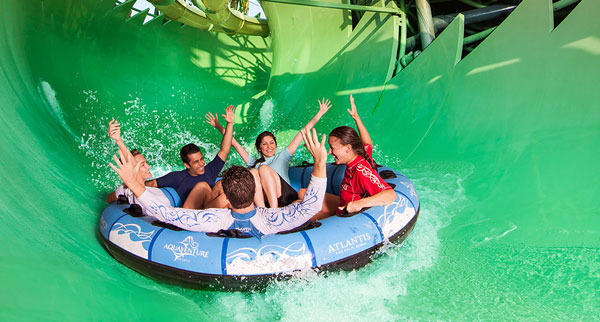 9 Aquaventure at Atlantis The Palm

Set on the grounds of the gargantuan resort of Atlantis The Palm, this 17-hectare water park is free for guests staying at the hotel or its sister brand One&Only.

As well as offering a staggering array of heart-pumping rides and slides, including two that thrust riders through shark-filled lagoons, the Middle East’s largest water park also features a Shark Safari, the longest zip wire in the Middle East, and cownose ray feeding.

For little ones, there’s the Splashers Children’s Play Area complete with gentle rides, climbing frames, and hanging bridges. Parents can take time out to relax on the 700-metre-long private beach while their kids run riot in the park, or dine in one of 15 on-site restaurants.

Book it: Travel 2 offers three nights at Atlantis The Palm for a family of four staying in a Deluxe Room on half-board, including flights and transfers, from £739 per person. Valid for departure on February 13, 2017. travel2.com 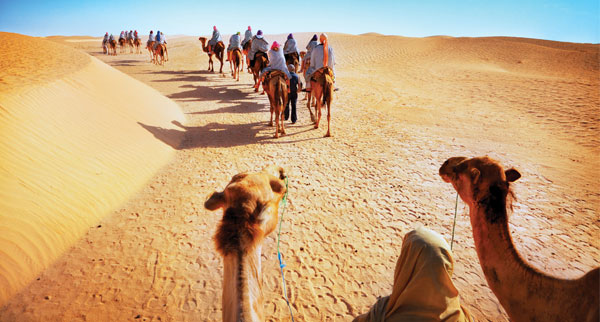 Dubai’s vast desert dunes await adventurous families, who can enjoy the fun with dune safari day trips that allow them to ride camels, dine in the desert and drive a four-wheel dune buggy.

Active types can take to the dunes for a spot of sand boarding, or fulfil their Indiana Jones-style dreams with a longer stay in a desert camp, complete with shisha pipes for the grown-ups and entertainment including belly dancing and sword balancing that the kids will love.

Book it: A Desert Safari costs £60 per adult and £50 per child, including travel in a luxury four-wheel drive car, camel riding, sand surfing and a barbecue at a Bedouin campsite with traditional entertainment. dosomethingdifferent.com