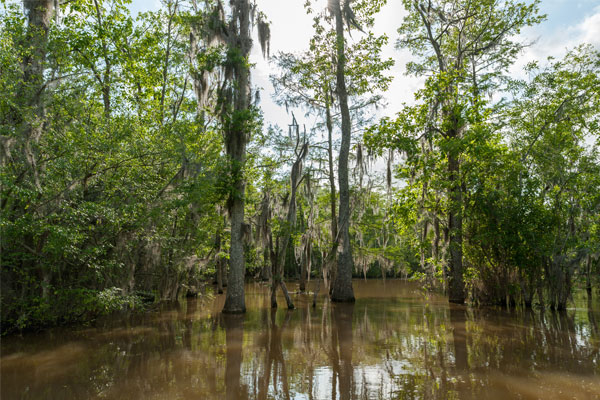 Robin Searle gets more than he bargained for on the alligator-filled waterways of Louisiana.

Like Captain Ahab hunting down the great white whale, Captain Judah knows the tell-tale signs to locate the 13ft alligator that lurks in the Honey Island Swamp and is affectionately known as Scarface.

But while Ahab relied heavily on the view from the crow’s nest and a spout or two to spot Moby Dick, Judah uses a slightly different point of reference.

“Once I see that abandoned refrigerator over there, I know Scarface won’t be far away,” he explains in his distinctive Louisiana drawl.

In an area of swampland regarded as one of the most pristine in the US, using discarded white goods as markers seems more than a touch incongruous.

But in a strange way, the semi-submerged fridge that flags Scarface’s territory serves as an apt reminder of how humans and a wealth of iconic flora and fauna have come to co-exist against one of America’s most beguiling backdrops. 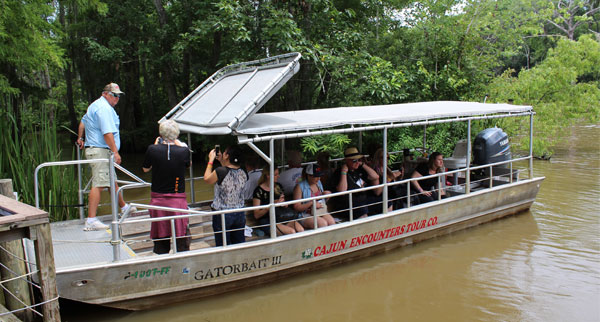 Just an hour away from downtown New Orleans, the Honey Island Swamp is an easily accessible and essential stop-off for clients visiting The Big Easy.

And with half of its 70,000 acres designated as a permanently protected wildlife area, it is a great place to get up close and personal with everything from bald eagles and wild pigs to show-stopping alligators.

The Cajun Encounters swamp tour begins on the banks of the Old Pearl River as it winds its way towards Lake Borgne and the Gulf of Mexico.

Like all the captains who act as guides on the company’s custom-made flat-bottomed boats, Captain Judah grew up in the area and his enthusiasm for his home is infectious and understandable.

When not talking tourists through the finer points of an alligator’s digestive system, he skippers ships delivering goods to oil rigs in the Gulf. But he freely admits he’d spend every daylight hour on the bayous and creeks of the swamp if given the chance.

After a brief burst of speed along the river and a blast of the so-called “Cajun air conditioning”, we find our way to one such backwater, armed with nothing more than a stick, some hot dogs and the marshmallows that Judah refers to as “swamp crack” for alligators.

Sure enough, it doesn’t take long for the boat to be surrounded as the gators jockey for position to leap from the water and grab a tasty morsel or two. 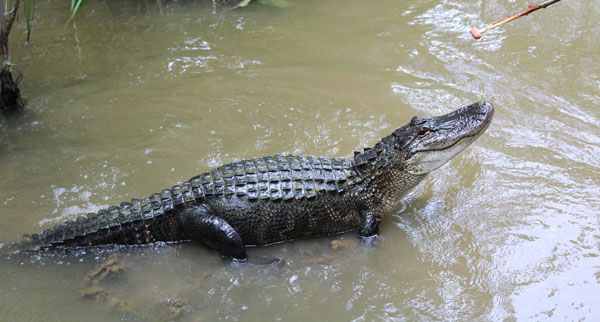 Of course, there’s no jockeying for position when we get on to Scarface’s patch – when you’re the length of a caravan with “a head like a 50-gallon drum”, you pretty much get all the marshmallows you want.

But even Scarface might be given pause for thought if confronted with the fabled Honey Island Swamp Monster, which is rumoured to frequent this particular area.

As stories go, the legend is pretty hard to beat. According to local lore, a train crash involving a travelling circus in the early 20th century unleashed into the southern Louisiana swamp a group of chimpanzees, which proceeded to interbreed with the resident alligators to spawn a seven-foot horror show with four toes on each foot and yellow eyes.

While this particular beastly tale might be a touch too tall to take seriously, there remains a wealth of fascinating stories about Honey Island’s human inhabitants at every turn. 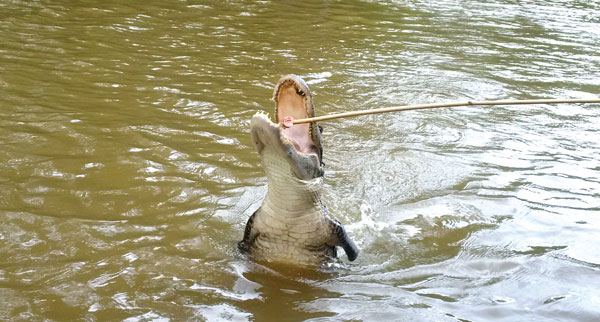 Drifting among the Bald and Pecky Cypress trees and distinctive Spanish moss hanging from the branches in the slow-moving waters of Maple Slew, we hear about the Whiskey Tree, where moonshiners gathered under cover of darkness during prohibition to sample their illicit wares.

And Captain Judah also gives us an insight into the stilted waterside houses – known as camps – many of which have undergone work to raise them a few feet after succumbing to the storm surge that overwhelmed the area during Hurricane Katrina in 2005.

Whether they relate to the swamp’s human or animal inhabitants, Judah’s insights are rarely less than fascinating. And as we weave our way through the semi-submerged tree roots (“Cajun icebergs”) to base camp, you can see exactly why he is so happy to give visitors the insider tour.

Hopefully the abandoned fridge will be removed soon and Judah will need to find another way to track down Scarface. But otherwise, you step off the boat hoping that this intriguing and beautiful area of the United States doesn’t change in the slightest.

Book it: Cajun Encounters offers tours of Honey Island Swamp alongside a range of other itineraries in and around New Orleans. It does not currently pay agency commission, but invites interested agencies to contact group sales director Leslie Landeche on leslie@pelicanneworleans.com to discuss partnerships. Many tour operators offer swamp tours as part of packages to the southern states of the US, and they can also be purchased through ticket specialists.

Attraction World and Do Something Different offer tours in the Jean Lafitte National Historical Park in New Orleans: the latter has a two-hour Swamp and Bayou Tour from £39 (£19 for six to 12-year-olds), while Attraction World’s excursion takes a short coach journey across the Mississippi River for a boat trip on the Louisiana swamps, from £43 per adult and £25 per child under 12. cajunencounters.com

Louisiana Plantation Life Tour: Drive down the Great River Road toward Baton Rouge to the Whitney, Laura or Oak Alley Plantations for a window on the world of antebellum Louisiana, focusing on first-person accounts of slavery.Adults £67, under-12s £47. dosomethingdifferent.com

New Orleans Cemetery and Voodoo Walking Tour: Wander around the maze of mausoleums in the ‘haunted’ St Louis Cemetery, learn about the city’s voodoo traditions, and make a wish at the tomb of infamous voodoo queen Marie Laveau.Adults £22, under-12s £13. viator.com