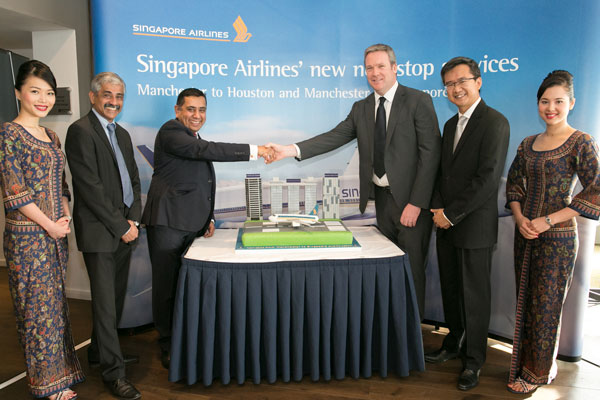 Singapore Airlines has introduced non-stop flights from Manchester to Singapore and Houston.

The long-haul carrier says it is the first direct route to the Texan city from the north of the United Kingdom.

Flights will run five times weekly to both destinations, adding to Singapore Airlines’ existing route to Singapore from Heathrow.

Sheldon Hee, general manager for UK and Ireland, said business and leisure travellers were being targeted in the move.

He said: “Houston is a bit different because it’s not as well known in the market. But it’s an opportunity because it’s a destination that we hope will be much more appealing than people think.

“There is the space industry Houston is famous for, it’s a great dining and shopping destination and there are lots of family attractions.

“It’s also an established route for business, because of the oil industry over there.

Hee said flying direct to Singapore from Manchester opened up the destination to customers from the north of the UK, adding that its partnership with regional carrier Flybe means it can connect 11 cities across the country.

“It’s a big boost for Singapore,” Hee added. “We have had strong demand from our travel partners. Not only does it provide a direct route into Singapore, but it opens up destinations all across south east Asia as well as connections to New Zealand and Australia.”

Before the new routes were introduced, the airline offered flights to Singapore from Manchester via Munich.

“That limited capacity from the UK,” said Hee. “You had to factor in the passengers joining at Munich.”

Lord Ahmad said: “Every year nearly 100,000 people fly from the North West to Texas or Singapore – for holiday or for business. Now they can fly directly.”

Ken O’Toole, chief executive at Manchester airport added: “This new service underpins the role we play in the north as the global entry point of the Northern Powerhouse and as economic provider and job creator for the region.”