Waiting to board the small car ferry at the southernmost end of Strangford Lough, the last link across the water before it opens out into the expanse of the Irish Sea, I cast a doubtful glance at the sky.

Sure enough, plump droplets of rain began to patter against the windscreen, turning the view into one murky mass of grey. So much for my scenic drive along the Ards Peninsula, an area of outstanding natural beauty – just 10 miles from the centre of Belfast – and a magnet drawing visitors to Northern Ireland’s easternmost coast.

“I headed back towards the banks of Strangford Lough, past tractors trundling through the fields and horse-riders plodding their way along winding country lanes.”

But I needn’t have worried. Barely a quarter of an hour later, having crossed the peninsula to the pretty fishing village of Kearney, it had transformed into a glorious summer’s day.

Clambering down to the stony shore at Kearney Point, I was met with a rush of salty sea air, waves frothing against the rocks, sun dazzling off the water and clouds fizzling away to reveal the distant outline of the Isle of Man on the horizon. 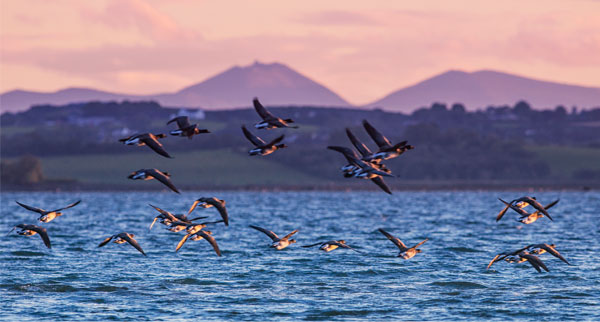 There would be plenty more scenery to explore as I headed back towards the banks of Strangford Lough, past tractors trundling through the fields and horse riders plodding their way along winding country lanes, to Greyabbey.

The village takes its name from a 12th-century Cistercian abbey, a marvel of Norman Gothic architecture and a key stop along the Saint Patrick Trail. Follow the ups and downs of the abbey’s long history on a wander through the ruins and into its historic graveyard, crowded with headstones dating back to the 18th century and beyond.

“The site’s gardeners lead guided tours through a series of formal gardens, planted in the 1920s by green-fingered owner Lady Londonderry.”

A little farther along the shore sits Mount Stewart, a grand stately home once used as a hospital for returning soldiers during both world wars, but the real beauty here lies in its acres of outdoor space. The site’s gardeners lead guided tours through a series of formal gardens, planted in the 1920s by green-fingered owner Lady Londonderry, and featuring rare species from around the world that are able to thrive in the relatively mild climate of the Ards Peninsula.

Despite numerous visits to Northern Ireland, I’d never made it this far east before, but it was a pleasant reminder of just how much there is to uncover closer to home, if only clients can take the time to enjoy the scenic route.

McKinlay Kidd offers a seven-night Giants, Saints and The Titanic self-drive itinerary, staying in Belfast, County Down and the area around Strangford Lough, and County Antrim, with a day trip to Rathlin Island. It costs £745 land-only between May and September, including B&B and some attraction tickets.
hastingshotels.com

The best new tours to book in the UK, Italy and Spain
Six of the best relaxing lake breaks across Europe
Five of the best new UK escorted tours for spring