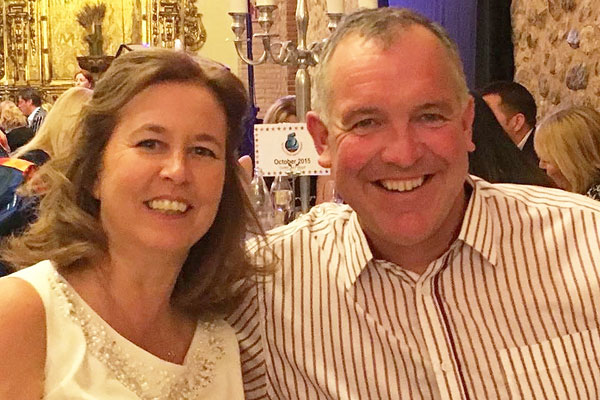 Sarah Davis, a Personal Travel Agents at Co-operative Travel homeworker based in Buckinghamshire, rallied colleagues to raise £600 for a tour guide in Bali during the pandemic. Juliet Dennis reports.

Q. You and your husband have a joint homeworking business – how did that come about?
A. Before I met Phil, I was a single mum and working as a medical secretary, doing 12-hour days in London. I thought ‘I can’t do this any more’. In 2001, I joined Thomas Cook’s Chesham branch part-time, where we met. We did all the shop work between us. After 9/11, I asked if he’d consider starting up on his own and how about we make a go of it? Everyone said it wouldn’t work, but we were top sellers every year for The Co‑operative Personal Travel Advisors [former Thomas Cook homeworking group]. We got together in 2006 and in 2012 got married. In that same year we left to work for The Personal Travel Agents at Co-operative Travel, part of Midcounties Co-operative Travel. My dad converted the garage into an office for us. We always say we are joined at the hip!

“I’m an optimist but it’s been really difficult. I’m still doing training webinars but it’s hard to sell holidays with passion at the moment.”

Q. How has the pandemic affected your business?
A. There has not been enough work for the two of us. Phil has just been doing refunds, not earning. Everyone is cancelling up to May 17 at the moment. I’m an optimist but it’s been really difficult. I’m still doing training webinars but it’s hard to sell holidays with passion at the moment. Last January, we turned over a quarter of a million – we were both working until 11pm each night! In May, I learnt to sew. I bought a £99 old Singer sewing machine and watched YouTube videos. When the schools went back in September, I made 200 to 300 masks to give out to the poorer children as there were lots of families who couldn’t afford masks. I sent them to schools to give out for free.

“We got to know Kadek and ended up spending six days of our holiday on tours arranged by him. By the end of it he was having fun with us, it was so nice.”

Q. Tell us about tour guide Kadek and how you met.
A. We were at the Meliá Bali hotel on a family holiday in Nusa Dua, Bali, in 2015. Kadek worked for a reputable tour company at a tour desk in our hotel offering excursions. We talked to him about what we wanted to do. He was the same age as one of my sons and I took to him straight away. What sealed it was that we had my 15-year-old son with us and he wanted to do quad biking. I thought we wouldn’t be able to get him insured, but two days later Kadek found someone to insure Matt to go on a bike. He went out of his way to help us. We got to know Kadek and ended up spending six days of our holiday on tours arranged by him. By the end of it he was having fun with us, it was so nice. On one day trip he took us out for 14 hours to meet locals and try coffee. He was a university graduate working up to 18 hours a day. 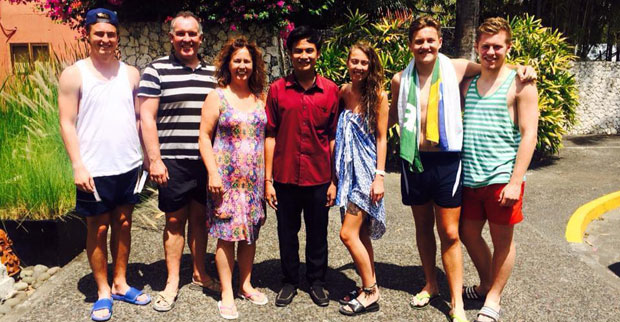 Q. What happened after you came home?
A. We kept in touch. He got married and had a baby boy, Agas, now three. We chat on WhatsApp and swap pictures. He calls me ‘Mum’. My daughter Ellie has been on several backpacking trips to the area and is always welcomed into Kadek’s family home. He’s been very good to her. He also helped one of the PTAs’ sons when they arrived late at night and the youth hostel was shut, putting him up at his cousin’s house. Lots of PTAs have recommended Kadek to clients after we introduced them to him on Facebook and he has taken them on tours tailored to what they wanted.

“My daughter Ellie has been on several backpacking trips to the area and is always welcomed into Kadek’s family home.”

Q. What happened to Kadek during the pandemic?
A. All tourism stopped and I found out in June they had moved to the city of Ungasan to look for work. He said things were not good and times were tough. He was trying to sell his wife’s homemade cakes door-to-door at people’s houses. His wife was working at a laundry doing ironing.

“I’d like to raise another £600 to see the family through another six months until Bali reopens properly and he can start working again as a tour guide.”

Q. Do you have any further plans to help?
A. I’d like to raise another £600 to see the family through another six months until Bali reopens properly and he can start working again as a tour guide. As I have learnt to sew, I am going to sell some of the masks I make to raise more money for Kadek. At the moment, this is emergency funding for him and his family. There are still no tour guiding jobs at the moment. 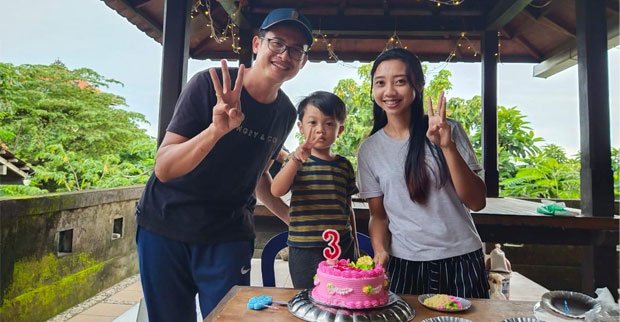 Pictured: Kadek with his wife and son

Why did you decide to help Kadek?

I just thought this is the time to make a difference. I am not a hero; he is not a victim. We are friends who live on opposite sides of the world. We have travelled all over the world and I have always thought we should do something sustainable. Last August, I went to the PTAs’ virtual office and said ‘I know everything is a nightmare at the moment with refunds, but Kadek has nothing and if we could each give him a fiver it would really help.’ I wanted to send him some money as he had showed such kindness and professionalism to our family, friends and clients.

“[Kadek] was very thankful and said it was a big amount for them. It meant they could return to their village to help their family.”

Most of our 165 PTAs gave something straight away; we got £600 in five days, enough to support Kadek and his extended family of 12 for six months. I was surprised because the PTAs didn’t have much themselves; there were no wages coming in. When I sent Kadek a message about it, he was quite shocked. He was very thankful and said it was a big amount for them. It meant they could return to their village to help their family. It was survival money and it changed their lives.