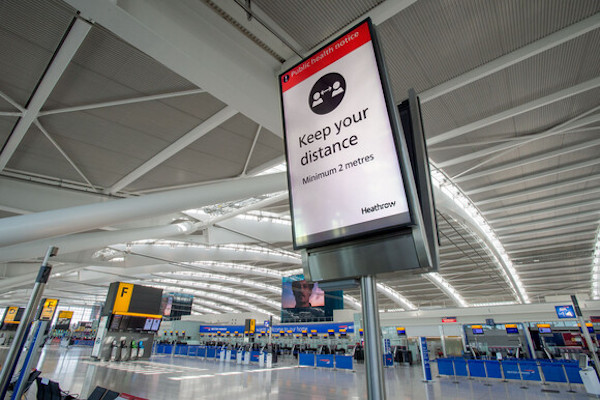 People travelling to England from 33 Covid hotspots must isolate under guard in government-mandated hotels for 10 days at a cost of £1,750.

Passengers arriving at Heathrow this morning told the Evening Standard about “huge queues” and “confusion” for people coming from high-risk countries.

The arrivals going into quarantine included some who had travelled via Doha in Qatar.

The flight arrived at 6.20am but travellers on the red list only emerged through immigration nearly two hours later.

Passengers reported big queues in the immigration hall with Border Force staff trying to establish who was on the red list.

However, health secretary Matt Hancock told Times Radio that the system has been operating “smoothly” since it came into force at 4am.

Over the weekend, the BBC and Telegraph reported that the airport said its key concern is the ability of Border Force to cope.

An airport spokesperson said: “Queues at the border in recent days of almost five hours are totally unacceptable.

“Ministers need to ensure there is adequate resource and effective processes at the border to avoid compromising the safety of passengers and those working at the airport, which could necessitate the suspension of some arriving flights.”

The airport is one of five in England where people requiring hotel quarantine can enter the UK and is expected to receive the largest number of passengers.

The other four are Gatwick, London City, Birmingham and Farnborough Airfield.

On Friday the Immigration Services Union told the BBC that its officials had yet to receive guidance on how the system would work and raised concerns about the safety of security halls.

And the GMB union warned that “rushed” government plans are not thorough enough to ensure workers in quarantine hotels are protected.

The Telegraph said an estimated 8,000 passengers a day will fly into Heathrow to quarantine either in government-approved hotels or at home – and the length of border checks could double to 15 minutes per arrival.

Staff faced long queues in recent days because of a surge in arrivals as travellers aimed avoid the 10-day enforced quarantine in hotels.

The government told the BBC it is working closely with airports and hotels to manage any issues that arise.

Meanwhile, all travellers arriving into Scotland from abroad by air, rather than just those from the 33 red-list countries, now have to go into quarantine hotels.