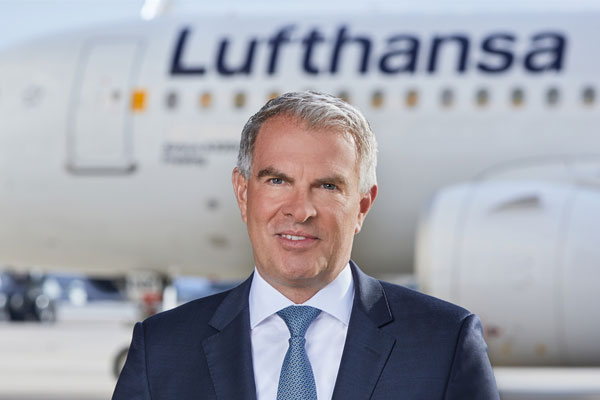 The Lufthansa Group announced plans to restore up to 70% of pre-crisis capacity as it reported a loss of €6.7 billion for 2020.

Lufthansa and sister carriers Swiss, Austrian Airlines, Brussels Airlines and Eurowings reported an operating loss of €5.5 billion, but the group insisted it is “well financed beyond 2021”.

Chief executive Carsten Spohr said: “From the summer onwards we expect demand to pick up as soon as restrictive travel limits are reduced.

“We are prepared to offer up to 70% of our pre-crisis capacity again in the short term as demand increases.”

Group revenue for the year fell by almost two-thirds to €13.6 billion and Spohr said the group had paid out about €3.9 billion in refunds to customers.

Spohr reported Lufthansa had €10.6 billion in liquidity available at the end of 2020, including €5.7 billion in unused “government stabilisation funds”.

Lufthansa had drawn €3.3 billion in government-backed funds, he said, of which €1 billion had already been repaid.

The company reported it continues to burn cash at a rate of about €300 million per month.

Lufthansa chief financial officer Remco Steenbergen noted the group raised an additional €1.6 billion in funds through the issue of bonds in February and said: “The latest transactions show how much confidence the market has in our company. The group is well financed beyond 2021.

“We have sufficient liquidity to withstand a market that remains difficult.”

He added: “Our crisis and cost management has taken effect much faster than originally hoped. At the same time, our business has recovered more slowly than we had hoped.”

However, Spohr claimed the group benefited from its hub system in comparison to rivals, arguing: “Unlike competitors, who offer point-to-point connections, Lufthansa Group airlines were able to bundle the low traffic volumes at their hubs and maintain important connections.”

He added: “The crisis is accelerating the transformation process in our company.”

Lufthansa cut its workforce by 20% to 110,000 last year and aims to reduce the headcount by another 10,000 employees in Germany this year.

The group has postponed planned aircraft deliveries and will reduce the size of its fleet from more than 700 aircraft to 650 by 2023.

Spohr said: “We are examining whether all aircraft older than 25 years will remain on the ground permanently.”

He suggested capacity would only to return to 90% of the 2019 level “by the middle of the decade”.