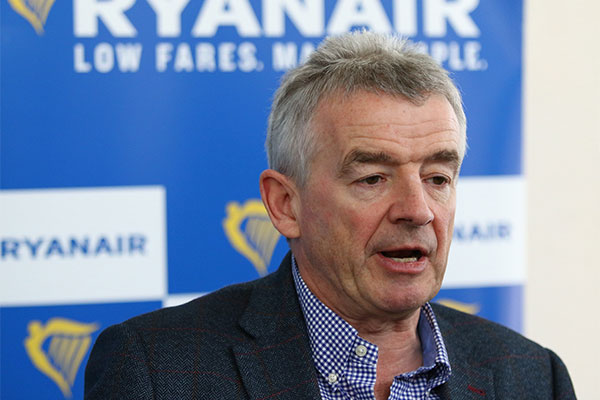 Ryanair chief Michael O’Leary has forecast a “strong recovery” in European holiday traffic this summer and dismissed what he described as “panic” about when international travel will restart.

O’Leary acknowledged the UK government’s restart date of May 17 “may move”, but insisted: “There will be a strong summer 2021.”

He said: “We’re very confident families will be travelling from the UK to the beaches of Europe this summer.”

The Ryanair group chief executive argued: “I see very little chance of restrictions remaining in place. Clearly, the traffic recovery could be slower than we’re currently planning for. But everybody across Europe is gearing up for June, July and August.

O’Leary said: “Boris Johnson’s current plan is there will be no international travel before May 17. That May 17 date may move. If it does it would affect our schedule accordingly.”

But he insisted: “Now is the time for optimism underpinned by the real data coming out of the remarkably successful vaccination programmes and not ill-informed news stories fuelled by the 24-hour news cycle.

He said: “Everyone is getting panicked about international travel. But it’s only March. There will be no travel over Easter, but people can book with confidence for the school [summer] holidays and if there is a change, people can postpone their plans.

“There is a kind of hysteria around at the moment.

“Remember there was a huge decline in Covid-19 case rates last summer even before there was a vaccine.

“We know for certain 50% of the UK adult population will be vaccinated by the end of March. We foresee very little restrictions on European short-haul in the second half of the year. We think the situation will change very quickly.

“European governments are very keen to welcome back UK visitors. The EU will have largely caught up with the UK by June, July, August. Once populations are vaccinated, governments will want to see travel return.”

Ryanair plans to operate 80% of its scheduled capacity during July-September.

O’Leary dismissed the suggestion that a standardised vaccination passport could be in use this summer, saying: “I’m wary at talk of digital health passes. The best we will manage this summer will be to allow people to upload their vaccination certificates or test results [to an airline app].

“I’m not sure there will be a reason for certification when 80% of the population are vaccinated.”

O’Leary was speaking as Ryanair unveiled its UK schedule for this summer which sees the carrier return to Belfast City airport after a break of 11 years.

The airline plans to operate more than 2,300 flights a week on 480 routes to and from the UK.