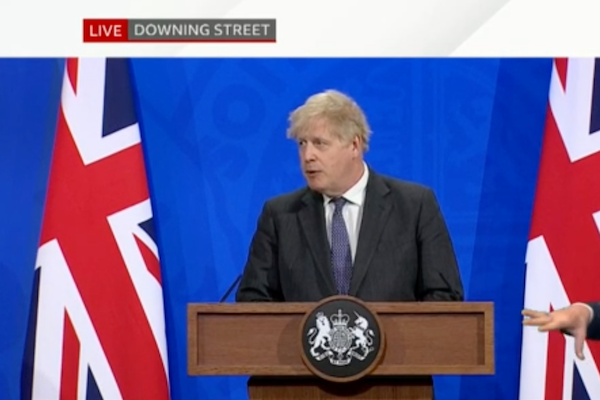 The prime minister has deflected criticism about the government putting India on the travel red list, saying the decision was taken by the independent Joint Biosecurity Centre.

His comments came during his Number 10 coronavirus briefing on Tuesday, in response to a question about the timing of the move – especially as “tens of thousands” have travelled between India and the UK in recent weeks.

He has faced criticism from those who thought the decision should have been made sooner because of rising cases of Covid-19 in India.

“What we’re seeing in India is as a result of a variant under investigation; it has not yet been deemed a variant of concern. That’s why there’s been a delay,” he said.

“Purely on a precautionary basis it is necessary to put India on the red list.”

Arrivals from Friday will be subject to a “more stringent regime” of hotel quarantine, he said.

He added that measures are already “very tough” as arrivals have to isolate, fill in a passenger locator form, and have tests on day two and day eight.

“Because of those tests, we have been able to isolate cases of the so-called Indian variant..that are currently under investigation,” he said, noting there have been “slightly over 100” cases identified in the UK.

“It is still a variant under investigation, not yet a variant of concern; we will look very carefully at any sign of it escaping the effect of the vaccines,” said Johnson.

In answer to another question about the red list, he said that all countries are kept under constant review by the Joint Biosecurity Centre.

“They will make their determination based on what they think we need to do, clearly if there is a variant of concern for instance, or if the disease is taking off rapidly,” he said.

When asked by The Sun about booking summer holidays, he said it is “premature to speculate” about the traffic light system that will categorise countries for overseas leisure travel from May 17.

“We would love to be able to give you and your readers a clear rundown of the countries that we think may be either red, amber or green; we won’t be able to do that at this stage,” he said.

“The Global Travel Taskforce has reported but what they said we’re really going to need to wait until early May until we set out which countries are on the list.

“You can see some of the troubles and problems that some of our friends are currently having.

“We will be saying more as soon as we possibly can before May 17.”