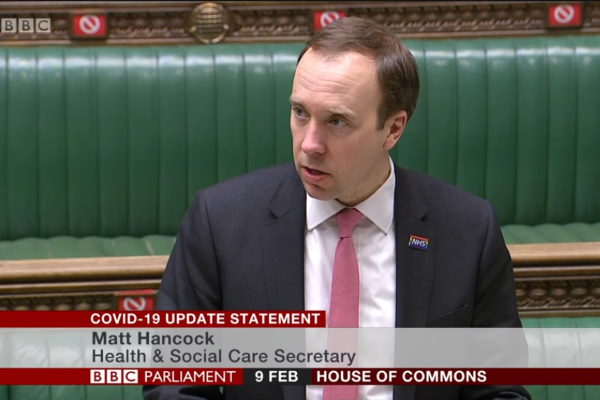 UK arrivals from 33 Covid hotspots must pay £1,750 for their own hotel quarantine, transport and testing, health secretary Matt Hancock has announced.

Announcing tougher border restrictions, he also said there will be “firm enforcement” with prison sentences of up to 10 years for those who lie on their passenger locator forms, and fines of up to £10,000 for those who fail to quarantine in assigned hotels for 10 days.

The new hotel quarantine regime will start on February 15, along with a requirement for returning passengers from other destinations isolating at home to have two PCR tests after arrival, in addition to negative tests before departure.

The hotel rooms and tests must be booked online in advance and the government has secured 4,600 hotel rooms at 16 hotels. The new website for booking hotels and tests will go live on Thursday (February 11) and more hotel rooms will be secured as needed.

The hotels are around a small number of ports and airports in England, where the majority of arrivals come into the country.

“People will remain in their rooms and will not be able to mix…and there will be visible security,” he said.

Hancock told the House of Commons that the new quarantine measures “build on the tough action we’ve already taken”.

“We must strengthen our defences further,” he said.

Government set to announce double-testing regime for all arrivals

Any positive result will “automatically undergo genomic sequencing to confirm whether they have a variant of concern” and the traveller will have to undergo a further 10 days in isolation.

The test to release scheme can still be used from day five of home quarantine in addition to the two mandatory tests, he added.

Anyone who lies on their passenger locator form about having been in a country on the red list will face a prison sentence of up to 10 years.

He said the scheme applied to England and similar schemes are planned for the devolved nations and Common Travel Area with Ireland.

“I make no apologies for the strength of these measures,” he said.