The Portuguese minister of state for foreign affairs has confirmed British tourists will be allowed to enter Portugal from Monday.

The decision was shared in a communication from the country’s tourist board which said restrictions will be relaxed from 00:00 on May 17.

Doubts had been cast over whether the nation would open its borders as the Lisbon government extended a ‘state of public calamity’ on the mainland for a further 15 days until May 30.

But the Portuguese National Tourist Office confirmed British tourists will be allowed to enter as of the 00:00 of May 17, with essential-only travel restrictions revoked.

Portugal was the only major European tourism destination to be named on the UK government’s green list last week. 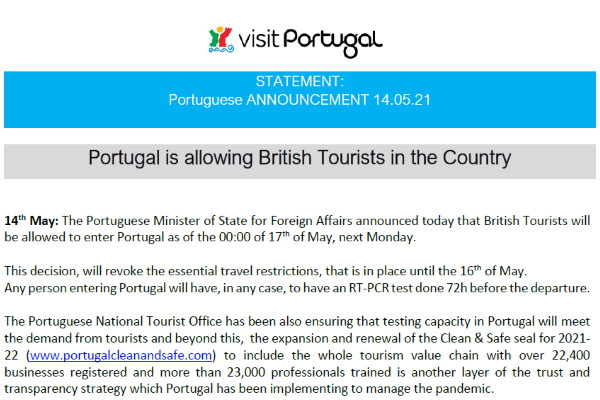 Any person entering Portugal must provide a negative RT-PCR test taken within 72 hours of departure.

Testing capacity in Portugal has also been expanded, the tourist board said, with more than 22,400 businesses registered and more than 23,000 professionals trained.

“With 48.5% of our international visitors arriving at Faro airport from the UK in a typical year, the absence of British visitors was noticed and missed last summer.”

“We also want to reassure visitors that tourism businesses are operating with health and safety protocols in place. Most have signed up to our ‘Clean & Safe’ Campaign, which means they follow our guidelines for keeping staff and customers safe.”

UK trade leaders also hailed the decision. EasyJet holidays chief executive Garry Wilson described it as “the news we’ve all been waiting for” while Julia Lo Bue-Said, chief executive of the Advantage Travel Partnership, said it was “wonderful news” and “the first step to safely reopening travel”.

Delay expected to easing of Covid-19 restrictions in Scotland