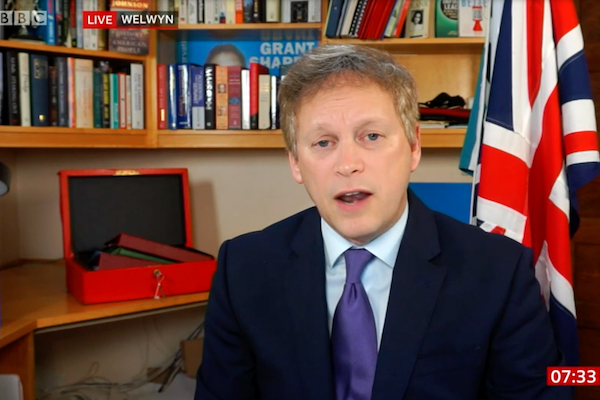 The transport secretary has warned the public “will not thank” the tourism sector if a restart of international travel halts domestic easing of Covid restrictions.

International travel is currently expected to restart in some capacity from May 17, but the destinations on the ‘green’, ‘amber’ and ‘red’ lists are yet to be confirmed while MPs are calling for information on which countries are likely to be included as soon as May 1.

Differing reports have suggested the traffic light lists will be revealed on May 8 and May 10. Speaking on a webinar hosted by Airlines UK and Conservative home on Tuesday, Shapps reiterated the lists would be shared in “early May”.

“I know there’s tremendous frustration in the aviation sectors, and the tourism sectors, about the restrictions that we continue to have to impose – and I share those frustrations 100%,” he said.

“But only by creating a very robust regime, a safe regime, for international – can we keep the nation healthy. People will not thank us if it’s through aviation and travel that we somehow end up going backwards from all of the sacrifices people have been through, including staying at home for the best part of a year.

“So we have to be absolutely certain we’ve nailed it this time. That way I think we will begin to bring the airline, and international travel sectors back to health.”

Ministers urged to list foreign travel freedoms by May 1

Shapps said holidays “very important”, in terms of people’s mental heath but that visiting friends and family overseas was “even more important”.

“At last we can think of a post-pandemic world,” he added, but stressed: “We have got to do this sensibly and, with the interests of the aviation sector in my heart, as much as for the rest of the country we have to do it safely and we have to do it once and for all.

“If that means you need two tests, one of which is a lateral flow test, and it’s free then people are used to taking tests now, that’s not a barrier.”

The transport secretary said the vaccine rollout “brings an opportunity, including the things we love, like international travel.” But he said it “risks losing those hard-won gains, particularly if we have variants which are a problem”.

He said he “understands completely” that airlines want to know which countries are on the green, amber and red lists, but that he “can’t” give any detail sooner than early May.

“If we learnt one thing over the last year it’s that countries’ situation with Covid does move very quickly indeed”.

“Whatever we do we have to make sure we don’t bring dangerous variants back into our country.”

Speaking on the webinar, he said: “Good policy has to look forward as well as thinking about where we are today.

“I understand completely the trauma that people have been through but I think if in two months’ time if you ask people should they be allowed to travel freely to and from a country when I have been vaccinated and vaccinations are at a high rate in that country, I think you’re going to get a very different answer.”

He noted: “We have to plan over a time horizon that isn’t just next week. If I want to rebuild our networks over the summer, and get people back working at British Airways, we need to be able to look ahead three or four months down the line.

Doyle said managing risk was natural for airlines. “That’s what we do,” he said. “It’s in our DNA and we’re very keen to make sure we restart safely.”

Doyle welcomed the recent taskforce announcement, but said its traffic light and testing system was “complicated” and “expensive”.

“What we would like to understand the data behind the framework,” he added. “There are many aspects we feel are over-engineered.”