Tradewind Voyages’ debut sailing was on hold on Friday morning after the line’s tall-ship Golden Horizon was prevented from leaving Dover due to a financial dispute.

The ship was due to depart Dover on a four-night sailing on Thursday but tracking website maritimetraffic.com showed it remained in port at 9am on Friday.

Reports on Thursday evening suggested Golden Horizon had been ‘arrested’ due to a financial dispute over money due to be paid to Star Clippers, which was originally due to take delivery of the ship.

Star Clippers confirmed in a statement: “Earlier today the English authorities have upon instruction of Star Clippers and with leave from the Admiralty Marshall arrested the vessel Golden Horizon in Dover.

“Despite several payment demands Croatian shipyard Brodosplit refused to voluntarily discharge its outstanding financial obligations to Star Clippers which made an arrest unavoidable.

“Star Clippers has advised the Brodosplit group that upon proper payment of the debt owed to Star Clippers the vessel will be released from arrest immediately.”

Despite the statement, a spokesperson for Tradewind insisted: “There are no outstanding payments, everything has been settled. The ship is continuing her voyages, as planned.”

A recording of the line’s latest onboard announcement shared with Travel Weekly said that paperwork is being completed and Golden Horizon is expected to depart Dover today.

The line said it would confirm a departure time “later”.

Vanessa Good, director of Scottish agency The Good Travel Company, is on the vessel’s inaugural sailing with her mother.

She said: “Hardly anybody on board knew that there was an issue. The departure was supposed to be at 6pm, but mum was looking ahead and the tug boats were taking the ship out of the harbour and there’s this traffic light system.

“The lights were actually red. I thought it was supposed to be sailing later on but then one of the girls on our table saw that it had been arrested.”

Good later spoke to the ship’s captain Mariusz Szalek who told her he was “confident” that there was not an issue.

“Most of the guests were fairly at ease but there will be grumbles without an update,” Good added. “It’s quite a unique situation and [Tradewind] has handled it really well. Of course, there are always going to be people who are grumpy about what is happening.”

She also said that customers booked on future sailings have contacted her to ask for updates about the ongoing situation. “Clearly there are some experiences that are going to be delayed,” she said.

Holiday Village homeworker Martin Sandland-Owen (pictured below) is also onboard the ship and said the atmosphere was “great” despite the uncertainty around the maiden voyage.

He said: “It is great onboard. It’s quiet at the moment and people are just having their breakfast. Everything is operating as normal – you would think that we were at sea. Everything on the daily programme is happening, the only difference is we’re docked in Dover. 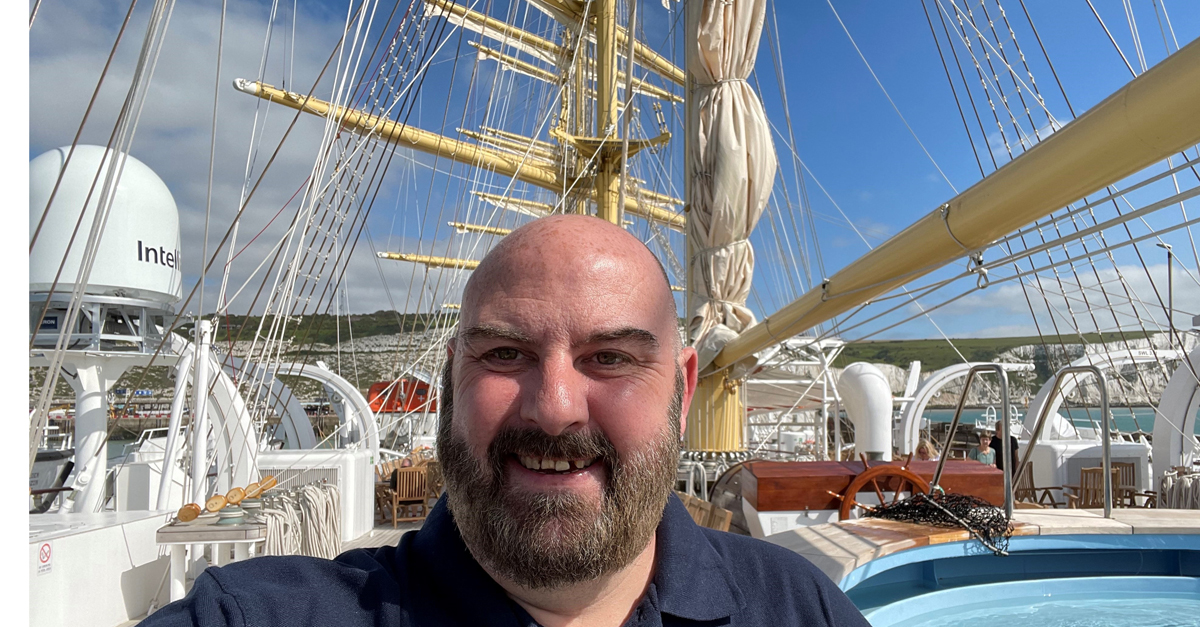 “We arrived at the port yesterday at 1.30pm and got on the ship at 2pm. We were supposed to leave at 6pm but as we left the captain turned the ship around, saying there was some paperwork to do.

“We were in the harbour and the captain came and said that we were going to stay in Dover and we would have a free bar. I was looking forward to the sail away party at 8pm but that did not happen. The crew have been great and looking after us.”

Travel Weekly is waiting for further comment from Tradewind Voyages.

The Port of Dover confirmed it would be providing a safe berth until the matter is resolved.

International cruise ban to be lifted