The facts: Celebrity Beyond is Celebrity Cruises’ third Edge-series ship. And apart from a few tweaks here and there, Beyond mirrors its sister vessels. You certainly feel that when the design team sat down to plan this ship, their mantra was “if it ain’t broke, don’t fix it”. And honestly, why alter something that works so well? The few changes include an extra deck, lengthening the ship by 66ft, and increasing capacity by 350 passengers. New venues include Le Voyage restaurant by French chef Daniel Boulud and the World Class Bar by the Grand Plaza.

Wow factor: In terms of atmosphere, there’s no other venue at sea quite like the Grand Plaza’s Martini Bar, which has been given more prominence and is now in the centre of the ship. If the buzz ever does dip, you can be sure the skilfully frenetic bar staff will launch into another mesmerising choreographed mixology performance with strobe lighting and bottle-throwing.

Don’t be mistaken into thinking you can only order martinis, the bartenders will pretty much make anything you want. Here you can just sit back and reflect on what a sensational ship class Celebrity has created. 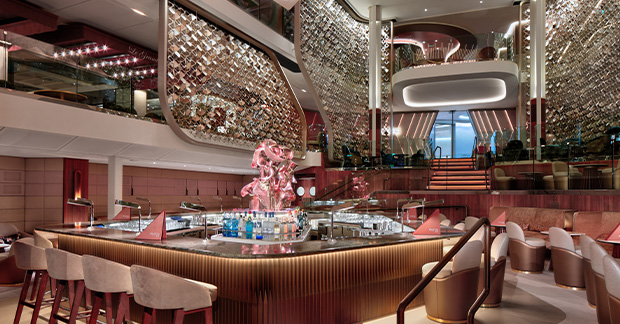 Food and drink: The menu at Daniel Boulud’s first at-sea restaurant Le Voyage focuses on international fine dining, featuring dishes such as Alaskan king crab salad and Wagyu filet mignon. Elsewhere, steakhouse Fine Cut has 12 more seats than Apex – a total of 148 – but no longer has an outside area.

The ship features four main dining rooms – each with capacity for 450 people. One of them, Cyprus, offers Greek and Mediterranean dishes and has a new design. About 75% of the menus across all four restaurants change every day and 25% stays the same.

Passengers in Aqua Class Sky Suites have access to the Luminae restaurant, which features a new design by British interior designer Kelly Hoppen. The menu at Luminae features everything from huevos rancheros to pancakes in the morning, with signature burgers for lunch and a rotating destination-inspired dinner menu.

Must-sees: The theatre is breathtaking, even though the stage has been reduced in size. Three different productions are available on Celebrity Beyond.

During our trade showcase sailing, we watched Elements and were absolutely blown away by the dynamic cast, who performed choregraphed hits against screen projections that I’d never seen on a cruise ship before. Garden-inspired space Eden, which debuted on Celebrity Edge, has further evolved with its entertainment offering. There’s at least one silent disco in Eden on every cruise.
celebritycruises.com 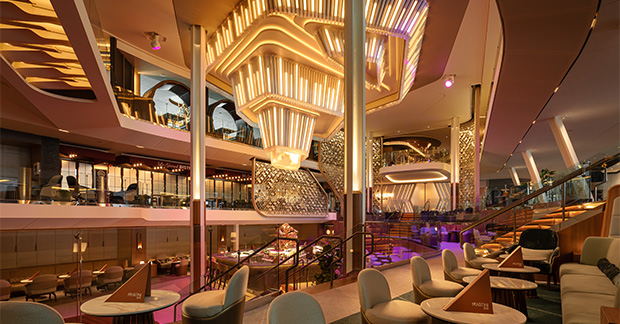 Book it: Celebrity Beyond will alternate between Civitavecchia and Barcelona this summer before repositioning to Fort Lauderdale in October. Prices for the nine-night Aruba, Curaçao & Cayman sailing departing from Fort Lauderdale on November 22, 2023, start from £845.