Q. What is your travel background?
A. After working for Travelpack, I became a homeworker with Instant Holidays, later to become Future Travel after the merger with Thomas Cook. I wasn’t happy with how things were looking and went on to be employed by a number of cruise companies in sales. A year after joining Travel Village Group, [owner] Phil Nuttall advised me to go self-employed and I’ve never looked back. Before the pandemic, I was running a multi-million-pound business from home. Being voted leisure agent of the year was the pinnacle of my career.

Q. How have you coped during the pandemic?
A. I’ve worked from home all the way through. I’ve not really noticed any difference but the thing that has affected me was being told I could not go out. Work was horrendous because most of the time I’ve been doing cancellations and refunds – ruining people’s holidays basically. However, I’m starting to see people that had cancellations book holidays for 2022 or 2023. I began to see this happening in July. I’d say 65% of our customers have moved bookings two or three times. I reckon I’ve had seven or eight bookings from people that initially cancelled.

“There’s still a bit of nervousness about travelling: lateral flow tests and how much they cost; ships being moved; flights being consolidated; and routes being changed.”

Q. Why do you think customers are coming back and booking?
A. The way I’ve been looking at it is we must have done things right because they do not have to come back and book with us. It’s the customer service. We’ve been there 24/7, holding their hand all the way through. The world is now opening up again. Booking levels are better but they’re not where they should be. While certain companies are raving about the situation, there’s still a bit of nervousness about travelling: lateral flow tests and how much they cost; ships being moved; flights being consolidated; and routes being changed. Personally, I think we’ve got another six to nine months of this.

“People wanted to know what was happening with cruise, so I thought ‘let’s showcase who we deal with and what they offer’ on Facebook by broadcasting live.”

Q. How have you kept in touch with your customers?
A. I had an idea late last year about bringing some of the cruise lines to people at home. People wanted to know what was happening with cruise, so I thought ‘let’s showcase who we deal with and what they offer’ on Facebook by broadcasting live. They ran from January to May this year. My mental health was not good before I started the ‘Lives’. I was getting no support from the government or grants. I did a little ‘Live’ recently about MSC Cruises’ northern Europe cruises and it makes you feel better. I’ve featured most ocean and river cruise lines, as well as Palladium Hotels and Saga. I’ve done 70 this year. For four months, I did three shows a week. I’ve also been on six cruises this year and done Facebook Lives on all of them. We’ve brought the ships to life and showed people what they look like.

“We were just two people on a sofa having a chat rather than doing anything heavily rehearsed. People like the raw element.”

Q. What has been the reaction to your broadcasts?
A. When I did the first one I was very nervous. I did it with Celebrity Cruises’ [strategic account manager] Michael Young-Richards. I’m good friends with him. We were just two people on a sofa having a chat rather than doing anything heavily rehearsed. People like the raw element. Some on Sky Princess said I was a travel influencer. I may not have 50,000 followers on my Facebook page but I’ve started thinking I’m influencing where people travel. At first, it was more of a soft sell rather than a hard sell. My Facebook page has got just under 3,000 followers. That is where the videos mainly go out. I might only get 10, 20, 30, 40 people watching it live, but people can watch it back.

“I’m going to take 20 passengers on Valiant Lady’s inaugural cruise in March. They’ve paid the same price as everyone else but they will get some added benefits.”

Q. How else do you plan to boost business?
A. I’m going to take 20 passengers on [Virgin Voyages’] Valiant Lady’s inaugural cruise in March. They’ve paid the same price as everyone else but they will get some added benefits like onboard credit. When I take people on sailings I’m going to call it ‘Cruise with Martin’. It would be great to do it two or three times a year. 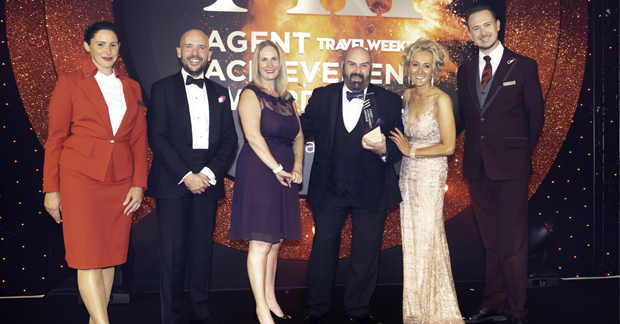 How did it feel to win the Leisure Agent of the Year award at the Travel Weekly AAAs?

Just to be nominated was amazing. Paula Nuttall [Holiday Village managing director] nominated me and I didn’t know anything about it until the nominations were announced. I was absolutely gobsmacked just to get that far because other people had done a lot of things for the industry. I was sat at the table at the AAAs with everyone and it was the last award. I’d had a bit to drink and they started to announce the award and then someone said I’d won. I just said ‘What?!’ Why did I win? Probably because I thought outside the box and have done something no one else thought about.

“I’d had a bit to drink and they started to announce the award and then someone said I’d won. I just said ‘What?!’ Why did I win?.”

I’m a one-man band. It kept me sane doing the Facebook Lives and kept me in contact with customers even though they could not travel. The way I feel about the Leisure Agent of the Year award is it is the top award in the industry. For agents to be picked by chief executives at big companies is amazing. I’ve now won two AAAs awards in 10 years after winning Homeworker of the Year in 2010.

Your Stories: A pop-up shop is helping GoCruise & Travel with Karen and Mark get off the ground

Abta to allow members to operate with ‘suitable’ trust accounts