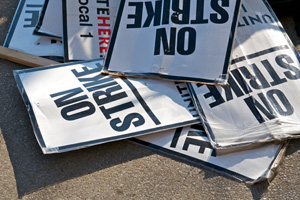 Airline chiefs have warned of “a summer of disruption” in Europe due to strikes by air traffic controllers and demanded the European Commission take action.

Speaking at an Airlines For Europe aviation summit in Brussels on Wednesday, Walsh said: “Air traffic control strikes create chaos. We’ve had large areas of the Continent closed to traffic. We’ve seen airlines having to re-route around France which increases flight times, increases fuel burn and emissions and damages the environment.

“This is not a minor irritation. It’s a serious issue and we need action. It’s damaging to our industry. We can’t have millions of consumers held to ransom.

“We’ve got used to dealing with it, but it’s unacceptable. The problem has become worse, [and] we think it will be worse in 2017. It’s time we put an end to this.”

She told the summit: “We continue to encourage the EC to take action. It isn’t about questioning the right to strike, but using all available social tools to minimise disruption.”

European Commission director general for mobility and transport Henrik Hololei said: “We are well aware of the problem. It concerns just a couple of countries. Unfortunately they are big enough to affect a lot of Europe.

“We are trying to find ways to mitigate it. The big issue is predictability. The strikes come unexpectedly. It should be best practice that there is a notice period that allows airlines to be prepared.

“The other issue is to have a European air traffic area so overflights can be serviced.”

He insisted: “We are not sitting idle, but things don’t move that fast.”

“Common service areas where overflights are protected is technically no problem. The problem is at the state level in allowing access to airspace.”

Walsh told the summit: “There is no technical reason it [protecting overflights] can’t be done. We would like to see it followed up.”

Airlines for Europe was set up in January last year by the chief executives of IAG, EasyJet, Ryanair, Lufthansa and Air France-KLM to enable them to speak with one voice in Brussels. It now has 14 airline members and McCall said: “We have become the most representative airline organisation in Brussels.”