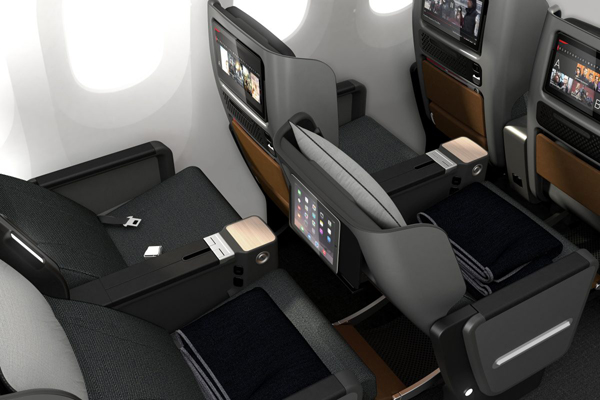 Qantas unveiled a new premium economy service for Boeing 787 Dreamliners to be introduced this year as it reported a fall in half year profits.

However, the Australian carrier attributed the fall in profit to the inclusion in last year’s result of a A$201 million gain from the sale of its terminal at Sydney airport.

The half year result was described as a “strong performance in a mixed global aviation market” as the airline goes through a period of transformation.

“Qantas and Jetstar’s domestic operations produced an outstanding result and Qantas Loyalty continued to thrive. It’s a combination that keeps delivering and sets us apart from our competitors.

“The international market is tough because of capacity growth and lower fares, and Qantas International is not immune from those pressures.

“But the work we’ve done on removing costs and making the business more efficient means Qantas International is outperforming its peers in the region.”

He added: “Our focus is to stay disciplined on capacity, keep downward pressure on costs, and introduce game-changing improvements like the Dreamliner and high-speed Wi-Fi.”

The first Qantas aircraft to offer free Wi-Fi is to be available in the next few weeks as part of a plan to equip 80 domestic aircraft followed by those on international and regional routes.

Two 787-9 Dreamliners are due to enter service by the end of the year, enabling the carrier to retire a pair of older Boeing 747s. A total of five 747s will be retired as eight Dreamliners enter the fleet.

The introduction of the 787 will enable Qantas to operate the first non-stop London to Perth service from March 2018.

The Dreamliner premium economy cabin will feature 28 seats in a 2-3-2 configuration. The new seats will be 10% wider than in the airline’s existing premium economy with an improved recline and seatback screens that are 25% larger.

Joyce said: “The Qantas Dreamliner will by flying some of the longest routes in the world, including non-stop from Perth to London, so we’ve focused on making each cabin the most comfortable in its class.

“Our Business Suite has been dubbed ‘mini first class’ by some of our frequent flyers and our economy seat for the Dreamliner has features that some reserve for premium economy.

“This new premium economy seat has serious wow factor. You have to experience how well it supports you when you recline to realise it’s completely different from anything else in its class.

“When you combine these seats with the increased cabin humidity and turbulence reducing technology on the Dreamliner, it makes it an aircraft customers will really enjoy flying on.”