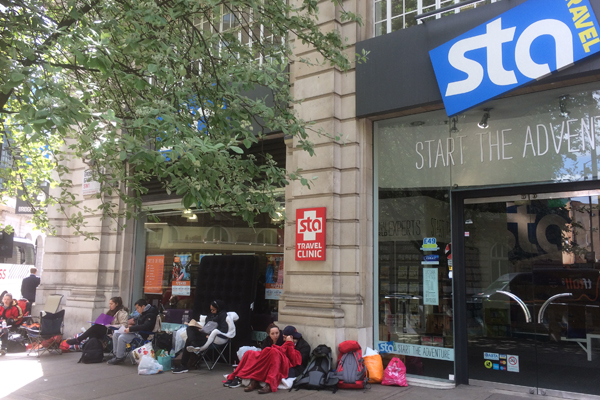 First in the queue were Thomas Gough, 20, and Billie Green, 22, pictured, who started the queue last night (Monday) for the £49 return tickets to Langkawi with Malaysia Airlines.

Gough said: “We found out about the sale at about midday on Monday and we came down as soon as we finished work. We plan to go travelling in June and now we are going to have two weeks in Langkawi and then get flights from there to Australia. I had never heard of Langkawi but it looks really nice in the pictures!”

The pair, who both work in customer care for clothing brand Asos, said the discounted tickets would be well worth the effort of camping out despite the sudden cold weather snap. 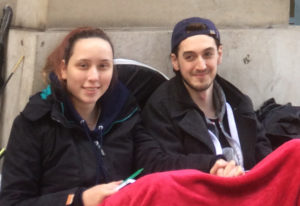 “It has been freezing so we have been to buy pillows and duvets but the tickets are about £500 off the price which makes it very cheap,” added Gough.

By lunch time today (Tuesday) there were around nine people in the queue.

The special fares will be available exclusively at STA Travel’s stores in London Victoria and Manchester Deansgate from 9am on Thursday, with 49 tickets being sold in each location.

Only one £49 fare is available to be bought per person.

Anyone who arrives at the queue by 9am after position 49, will go into a raffle for one final £49 ticket.

Those who miss out on the £49 fares, can still book a ticket to Langkawi by paying a special deposit of £49 that day.

There will then be another exclusive offer of 50 return tickets to Langkawi for £149, in both the London Victoria and Manchester Deansgate stores with 25 tickets available at each store.

Outbound departure travel dates cover May 1 to June 30 or November 1-30. No inbound travel permitted between August 11 and September 17 and all travel must be completed by the end of the year.