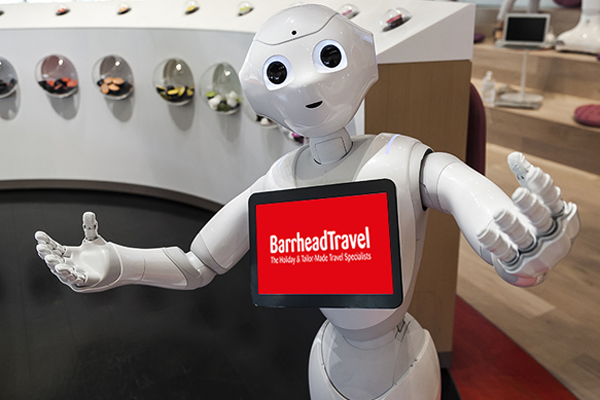 Barrhead customers will soon be greeted by robots and holograms when they go in store to book a holiday.

The Scottish agency has revealed plans to introduce metre-high Pepper robots and Tensator Virtual Assistants, or ‘holograms’, which will have female human faces and be dressed in Barrhead uniforms outside shops.

Barrhead Travel Group is rolling out a raft of new tech in the coming weeks to attract new customers and boost sales at its branches in high footfall areas such as shopping centres.

The robots will zip around stores and be programmed to answer common questions and refer customers on to Barrhead’s human travel consultants.

Both the robots and the holograms will be voice activated and able to answer a series of FAQs. Eventually, they will be able to have a conversation with customers, and potentially close a sale.

Barrhead founder and chairman Bill Munro said: “It’ll be a bit of a novelty but once they’re trained they’ll be jack-of-all-trades agents. You can’t expect agents to know everything about everything, so they will be a great support.

“When you’re looking for a holiday, part of it is the discovery stage. That’s where the robots will help.”

He said that, in time, the artificial intelligence will become more knowledgeable and be able to answer more questions but admitted it would take “quite a few years” before they could understand body language and tone of voice.

“It’s not going to replace the consultant but it will work with the consultant,” he added. “Ultimately, it’s to get people in front of a human being or lift up the phone.”

Barrhead is spending big on tech, with online chat bots that can answer customer queries 24/7 which can also be used by agents to help respond to a question they may not know the answer to. Munro said this would have the biggest day-to-day effect of the technology.

Barrhead’s technology drive also includes funding software for its agents to use to leave video voicemails for busy customers stretched for time to make a return visit to a branch and to save staff from making multiple follow-up calls.

Munro added: “Video is the future of marketing. It helps to tell the story better, it is more personable and helps create brand and customer loyalty.”

He said companies which interact with customers via video have better conversion rates.

At Barrhead’s new Leicester shop which is due to open in the coming weeks, large LCD screens will show “impact imagery” of destinations and allow customers to view hotel rooms, balconies and verandas or see cruise ships’ cabins and public areas before they buy.

The move into tech follows shifts from other travel agents such as Thomas Cook, which recently opened its latest Discovery Store in Scotland, with a focus on virtual reality. Thomson, meanwhile, is trialling a ‘virtual travel agent’ in the form of an online chat.

A new customer portal meanwhile allows agents to give detailed quotes in email form, which clients can open at home with 360 room tours, maps and destination content. Quotes are personalised based on data the customer uploads, such as past and future holiday plans.

And customers can share experiences in a community forum. They can post photos and videos, read blogs, have live conversations with Barrhead agents or watch live feeds from resorts of cruise ships.

Munro added: “At Barrhead Travel, tomorrow’s world is here today and we are not stopping here.”