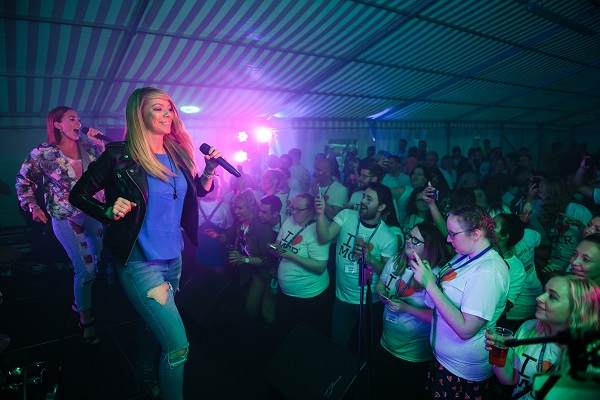 Atomic Kitten and X Factor finalists were among the performers at the first summer festival to be held by cruise agent World Travel Holdings UK (WTH).

The Chorley-based agent and call centre, which includes brands Cruise 118, Six Star Cruises and River Voyages, held a day of It’s a Knockout-style challenges for its staff alongside suppliers before holding the music event in the evening.

Nine teams competed with each other. Eight were sponsored by a different cruise line from Silversea, Princess Cruises, Royal Caribbean, Avalon, P&O Cruises, Seabourn/Holland America Line, Scenic/Emerald and MSC Cruises and there was a team led by WTH managing director James Cole.

Teams went head-to-head in the It’s a Knockout-themed events with contestants straddling sausages, balancing pints on their heads, wrestling while dressed as penguins and catching soaking wet sponges.

The agents then changed into their ‘I love MCR’ t-shirts in support of the victims of the Manchester bombings.

The day raised £480 for the victims’ families which WTH will now double.

Performers later took to the stage, including the Clia Conference’s Princess Variety Performance winners Sara Creeney and Lauren Wood – who both work for Cruise 118.

Check out the full gallery here.