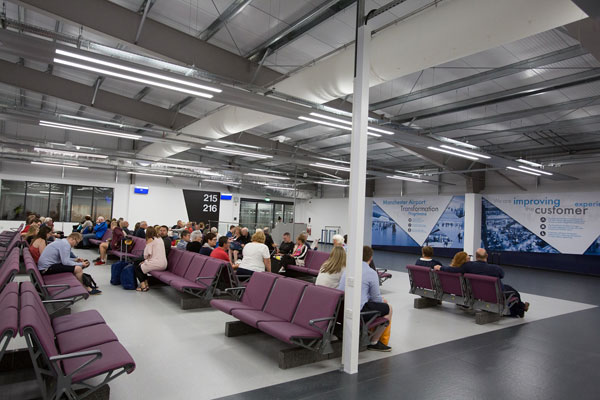 The first part of Manchester airport’s £1 billion redevelopment has been unveiled as the summer holiday season comes to an end.

Some passengers passing through Terminal 2 will now use a new temporary gate lounge that can hold up to 650 passengers.

The first part of the transformation programme comes after the airport’s busiest ever bank holiday weekend, with more than 420,000 passengers passing through the terminals over the three days.

The first passengers used the lounge this week and more flights will now use the facility after successful trials.

It will be in operation for up to two years, with the wraps taken off the new building a little over a month after work on the project began.

The new gate lounge will allow the west half of Terminal 2 to be demolished and rebuilt.

The new terminal building is expected to be operational by 2019.

Airport delivery director Rob Stewart said: “The opening of the lounge is the first milestone for the project since work started.

“It will allow us to demolish the western side of Terminal 2 and passengers will soon see cranes in place starting those works.

“The new facility has been finished to a high standard and it is great to use the space to tell passengers travelling to destinations ranging from Beijing to San Francisco about the history of Manchester airport and our plans for the future.

“Excitement is really building about the changes taking place at the airport and we are looking forward to seeing it develop in the weeks and months ahead.”