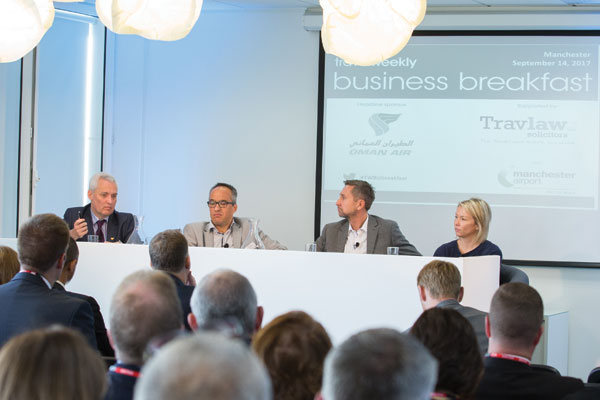 Travel should be at the centre of the government’s Northern Powerhouse regional economic revival strategy, according to Manchester Airports Group’s Collette Roche.

Speaking at a Travel Weekly Business Breakfast held at the airport, Roche, a member of the Northern Powerhouse board, said improved connectivity and infrastructure was crucial to the region’s future prosperity.

She said boosting transport links between northern cities such as Manchester, Liverpool and Leeds, and better connections to global destinations, could boost the north’s economy by up to £100 billion in gross added value by 2050.

“We need to be part of ‘Team North’,” said Roche, Manchester Airports Group chief of staff.

“The only way to open up the north is to make sure you can get from Liverpool or Leeds to Manchester in 30 minutes.

“That will mean we can treble the catchment; so 10 million or more people will be able to get to the airport, which will open up 20 to 30 new long-haul routes.

“The Cathay route [daily flights to Hong Kong from December] will bring in £250 million per year,” Roche added. “Imagine that times 30. It’s a massive spoil to be shared.”

A desire to attract talent was behind the homeworking travel agency’s decision to relocate its head office from Bolton to Manchester in 2015, he said.

“It’s about the physical and digital infrastructure, and not just Manchester,” Byrne added. “It’s about northern cities’ connectivity delivering a broader talent pool.”

Fraser Ellacott, managing director of Rentalcars Connect, and John Boler, chief financial officer at Thomas Cook Airlines, agreed that it was up to businesses to retain talent by committing to the north.

“A number of travel companies are really growing on the back of tech talent,” said Ellacott.